KINSHASA, Nov 15 (Reuters) – Former Nigerian President Olusegun Obasanjo said on Saturday his efforts to end fighting in Congo were going fairly well and that President Joseph Kabila had not given conditions for talks with the rebels.

Kabila’s army is battling dissident Tutsi general Laurent Nkunda’s rebels and Obasanjo has been charged by the United Nations with stopping the violence escalating into a re-run of the 1998-2003 conflict that sucked in six African nations.

“(I) am trying to draw together the strands that we need … for us to be able to move forward. That has gone fairly well so far,” Obasanjo told reporters in Kinshasa after meeting Kabila.

But as he arrived in eastern Congo, where he is due to meet Nkunda on Sunday, U.N. and rebel officials said there had been sporadic fighting between the army and the rebels to the north of Goma, the capital of North Kivu province.

The United Nations says weeks of fighting have caused a humanitarian catastrophe. On Friday, aid workers began feeding tens of thousands of refugees in rebel-held areas.

Additional Background on the War in Congo from Reuters 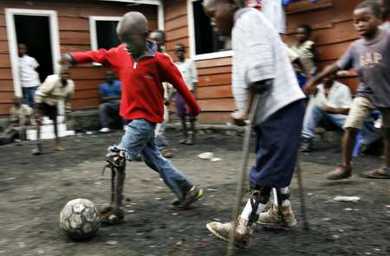 Children with polio play soccer in Goma in eastern Congo, November 15, 2008. Former Nigerian President Olusegun Obasanjo met Congo’s Joseph Kabila late on Friday and will fly east to hold talks with rebel leader Laurent Nkunda to try to avert a wider regional war and end a humanitarian crisis. Battles between Nkunda’s fighters and the army have uprooted some 250,000 people in Congo’s North Kivu province, and Obasanjo is tasked by the United Nations with stopping a repeat of a 1998-2003 conflict that sucked in six African nations. REUTERS/Finbarr O’Reilly (DEMOCRATIC REPUBLIC OF CONGO) REUTERS/FINBARR O’REILLY