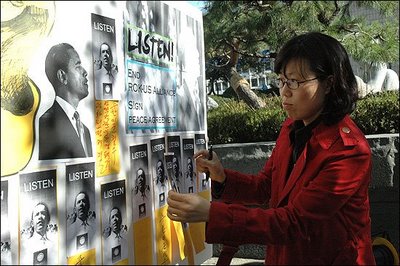 Some people are not waiting to see what Obama will do as president before acting. In South Korea activists are now meeting and publicly calling on president-elect Obama to end the dangerous and costly U.S.-South Korea (ROK) military alliance that is contributing to major tensions in the region.

The U.S. is currently doubling its military presence in the Asian-Pacific region. New and expanded Pentagon bases are going into Guam, Australia, Japan, and South Korea. “Missile defense” is being peddled to Australia, Japan, and South Korea which is forcing China, who today only has 20 nuclear missiles capable of hitting the west coast of the U.S., to produce more for fear that a U.S. “first-strike” could knock out their nuclear capability. In fact the U.S. Space Command has been war gaming such a first-strike attack on China for the past several years!

Not Waiting for Godot continued . . .

← New York Times spoofed: “The Iraq War is Over”
War in Congo →