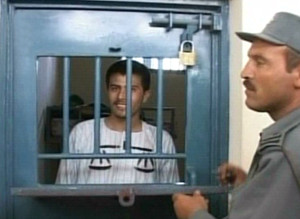 KABUL, Afghanistan — An Afghan appeals court overturned a death sentence for a journalism student accused of blasphemy and instead sentenced him Tuesday to 20 years in prison.

The death sentence against 24-year old Parwez Kambakhsh came to symbolize Afghanistan’s slide toward an ultraconservative view on religious and individual freedoms.

Prosecutors alleged that Kambakhsh disrupted classes by asking questions about women’s rights under Islam. They also said he illegally distributed an article he printed off the Internet that asks why Islam does not modernize to give women equal rights. He also allegedly scribbled his own comments on the paper.

The head of Tuesday’s three-judge panel, Abdul Salaam Qazizada, struck down the lower court’s death penalty but still sentenced Kambakhsh to 20 years behind bars. The judge said the decision can be appealed to the Supreme Court.

“I don’t accept the court’s decision,” Kambakhsh told The Associated Press as he was leaving the courtroom. “It is an unfair decision.”

John Dempsey, a U.S. lawyer working for six years to reform the Afghan justice system, said Kambakhsh has yet to get a fair trial.

“Procedurally, he did not have many of his rights respected,” said Dempsey, who has been following the case and was present for the trial. “He was detained far longer that he should have been legally held. The defense lawyer was not even allowed to meet the witnesses until a night before the trial.”

On Tuesday, five witnesses from Mazar-e-Sharif — two students and three teachers — appeared before the judges.

The first witness, a student named Hamid who gave only one name, told the court he had been forced into making a statement accusing Kambakhsh of blasphemy by members of Afghanistan’s intelligence service and a professor who threatened him with expulsion.

Other witnesses testified that Kambakhsh had violated tenets of Islam.

Kambakhsh was studying journalism at Balkh University in the northern city of Mazar-i-Sharif and writing for local newspapers when he was arrested in October 2007.

In January, a lower court sentenced him to death in a trial critics have called flawed in part because Kambakhsh had no lawyer representing him. At the time, Muslim clerics welcomed the lower court’s decision and public demonstrations were held against the journalism student because of perceptions he had violated the tenets of Islam.

The New York-based Committee to Protect Journalists said earlier this year it was concerned that Kambakhsh may have been targeted because his brother, Yaqub Ibrahimi, had written about human rights violations and local politics.

Ibrahimi told AP on Tuesday that his brother was sentenced because of the pressure from warlords and other strongmen in northern Afghanistan, whom he has criticized in his writings.

Reporters Without Borders called on President Hamid Karzai to intervene, and the International Federation of Journalists denounced the lower court’s closed-door trial and Kambakhsh’s lack of a lawyer.

. . . Revolutionary Association of the Women of Afghanistan (RAWA) kindly asks all freedom-loving individuals and organizations who believe in human rights and democracy to stand up against the unjust imprisonment of Parwiz Kambakhsh, and ask for his immediate release. Only your strong support for justice and freedom can stop the mediaeval acts of the Afghan government and its allies, which are in the style of the brutal Iranian regime.

Please email your protest letters to:

The Supreme Court of Afghanistan
aquddus@supremecourt.gov.af

You may also send protest letters to Afghan embassy in your country.

← Oct. 18 – Winnipeggers oppose the war in Afghanistan
“War is the crime of our times.” →