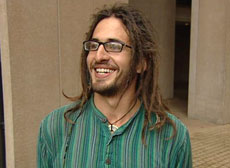 Long’s supporters, who flooded the Fort Carson, Colorado courtroom where the court martial was held and held a vigil in his honor, expressed dismay at the harsh verdict. “It sets a very chilling precedent that someone who is brought back gets the book thrown at them,” said Ann Wright, a retired U.S. Army Colonel who publicly resigned in opposition to the invasion of Iraq and served as a witness at Long’s trial. “I hope the Canadian government recognizes that.”

Three years ago, Robin Long fled to Canada rather than fight a war in Iraq he deems immoral and illegal. On July 15th, the Canadian government forcibly returned Long to U.S. military custody, making him the first war resister deported from Canadian soil since the Vietnam War.

The Canadian government’s actions flaunt its long-standing tradition of providing safe haven for U.S. war resisters and ignore a non-binding parliamentary resolution to allow U.S. soldiers to stay in Canada.

Long is a part of a growing movement of GI resistance against the Iraq War, and his case has been met with widespread support from friends and allies throughout the United States and Canada.