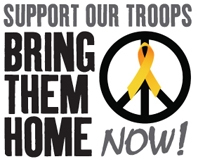 We do so because the “Yellow Ribbon” and “Red Friday” campaigns in Canada signify support for militarism and war. They do so under the guise of caring and compassion for “our troops.” But in reality, these campaigns are code for supporting a war of aggression being carried on in the name of, and against the will of, the majority of Canadian people. (A June 2008 poll suggests that only 36 per cent of Canadians agree with Parliament’s decision to extend Canada’s military intervention in Afghanistan through 2011. That is down from 41 per cent in a similar poll done in May, according to Angus Reid Strategies. )

We object strenuously to the war in Afghanistan and to the use of Canadian soldiers in that war. In no way is the participation of Canadians in the ongoing carnage in Afghanistan supportable by informed people of conscience.

In March, you announced provincial support for the Yellow Ribbon Campaign.  You followed this up with the planting of the “Yellow Ribbon Garden” in the front of the Legislature. Most recently, you agreed to host a “Red Shirt Rally” with MLA, Bonnie Korzeniowski, Special Envoy for Military Affairs as one of the featured speakers. While you are entitled to express your personal opinion about the war (one which is diametrically opposed by the federal New Democratic Party), you do not have the right to use provincial resources to promote it.

Action: Peace Alliance Winnipeg encourages you to circulate this letter widely and to communicate with the Premier of Manitoba and Manitoba MLAs. 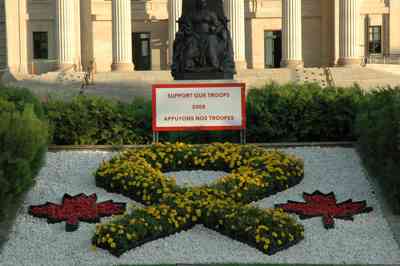 The Yellow Ribbon Garden in front of the Manitoba Legislature asks people to “support our troops.” This is code for “support the war” and is one of the many tactics employed to manipulate the emotions of Canadians, justifiably concerned for the safety of our soldiers, into supporting an immoral war against the Afghan people.

5 comments for “Open Letter to Gary Doer: Stop supporting the war in Afghanistan”