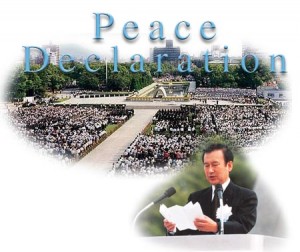 Another August 6, and the horrors of 63 years ago arise undiminished in the minds of our hibakusha, whose average age now exceeds 75. “Water, please!” “Help me!””Mommy!” ― On this day, we, too, etch in our hearts the voices, faces and forms that vanished in the hell no hibakusha can ever forget, renewing our determination that VNo one else should ever suffer as we did.”

Because the effects of that atomic bomb, still eating away at the minds and bodies of the hibakusha, have for decades been so underestimated, a complete picture of the damage has yet to emerge. Most severely neglected have been the emotional injuries. Therefore, the city of Hiroshima is initiating a two-year scientific exploration of the psychological impact of the A-bomb experience.

This study should teach us the grave import of the truth, born of tragedy and suffering, that “the only role for nuclear weapons is to be abolished.”

This truth received strong support from a report compiled last November by the city of Hiroshima. Scientists and other nuclear-related experts exploring the damage from a postulated nuclear attack found once again that only way to protect citizens from such an attack is the total abolition of nuclear weapons. This is precisely why the Nuclear Non-Proliferation Treaty and the International Court of Justice advisory opinion state clearly that all nations are obligated to engage in good-faith negotiations leading to complete nuclear disarmament. Furthermore, even leaders previously central to creating and implementing US nuclear policy are now repeatedly demanding a world without nuclear weapons.

We who seek the abolition of nuclear weapons are the majority. United Cities and Local Governments, which represents the majority of the Earth”s population, has endorsed the Mayors for Peace campaign. One hundred ninety states have ratified the Nuclear Non-Proliferation Treaty. One hundred thirteen countries and regions have signed nuclear-weapon-free zone treaties. Last year, 170 countries voted in favor of Japan’s UN resolution calling for the abolition of nuclear weapons. Only three countries, the US among them, opposed this resolution. We can only hope that the president of the United States elected this November will listen conscientiously to the majority, for whom the top priority is human survival.

To achieve the will of the majority by 2020, Mayors for Peace, now with 2,368 city members worldwide, proposed in April of this year a Hiroshima-Nagasaki Protocol to supplement the Nuclear Non-Proliferation Treaty. This Protocol calls for an immediate halt to all efforts, including by nuclear-weapon states, to obtain or deploy nuclear weapons, with a legal ban on all acquisition or use to follow by 2015. Thus, it draws a concrete road map to a nuclear-weapon-free world. Now, with our destination and the map to that destination clear, all we need is the strong will and capacity to act to guard the future for our children.

World citizens and like-minded nations have achieved treaties banning anti-personnel landmines and cluster munitions. Meanwhile, the most effective measures against global warming are coming from cities. Citizens cooperating at the city level can solve the problems of the human family because cities are home to the majority of the world’s population, cities do not have militaries, and cities have built genuine partnerships around the world based on mutual understanding and trust.

The Japanese Constitution is an appropriate point of departure for a “paradigm shift” toward modeling the world on intercity relationships. I hereby call on the Japanese government to fiercely defend our Constitution, press all governments to adopt the Hiroshima-Nagasaki Protocol, and play a leading role in the effort to abolish nuclear weapons. I further request greater generosity in designating A-bomb illnesses and in relief measures appropriate to the current situations of our aging hibakusha, including those exposed in “black rain areas” and those living overseas.

Next month the G8 Speakers’ Meeting will, for the first time, take place in Japan. I fervently hope that Hiroshima’s hosting of this meeting will help our “hibakusha philosophy” spread throughout the world.

Now, on the occasion of this 63rd anniversary Peace Memorial Ceremony, we offer our heartfelt lamentations for the souls of the atomic bomb victims and, in concert with the city of Nagasaki and with citizens around the world, pledge to do everything in our power to accomplish the total eradication of nuclear weapons.