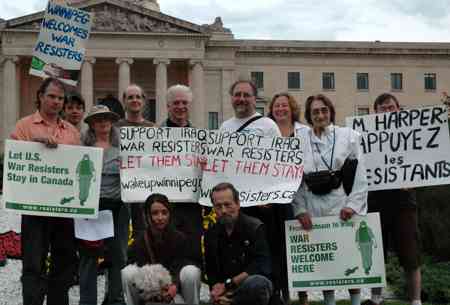 About 15 Winnipeg peace activists assembled at the Manitoba Legislature in Winnipeg, July 10, to show solidarity with American soldiers who have fled to Canada rather than participate in the ongoing war crime being perpetrated by the United States in Iraq.

Here are recordings of what speakers at the vigil had to say about this war and others and the importance of standing in solidarity with American war resisters.

As Vietnam war resister Howard Davidson put it: “Without soldiers, there is no war.”

Vigil organizer Michael Welch focused on the motives of American war resisters and their refusal to continue to fight in a war that has claimed the lives of over one million men, women and children. He called on the federal government to implement the will of Parliament and the Canadian people and let war resisters stay in Canada. Listen.

Speaking from the perspective of an aboriginal person, Cheryl-Anne Carr reflected on the courage, the spiritual beliefs and the Cherokee heritage of American war resister Joshua Key before leading the group in a Cherokee song. Listen.

Vietnam war resister Howard Davidson described recent attempts to have war resisters recognized as refugees as groundbreaking. He spoke of American war resisters and Israeli refusniks, noting that they were doing what we all should be doing according to international law: refusing to participate in immoral wars. Listen.

Peace Alliance Winnipeg chairperson Glenn Michalchuk spoke of the broad Canadian support for war resisters and opposition to the wars in Afghanistan. He noted that these issues had drawn a line — on one side are most Canadians — on the other “official circles in Canada: the media, the military and the government who have come out in blind support for the American war on terror.” Listen.

Christian Peacemaker Team member Joel Klassen described a vigil that had been held at noon by the Mennonite Churches of Canada and the United States at their annual conference. About 150 people participated. He then led the group in reciting a prayer written by Christian Peacemakers activist James Loney, entitled Litany of Resistance. Listen.

We apologise for the poor quality of the audio, but if you want to read the prayer, go here.

12 comments for “July 10th Vigil at the Manitoba Legislature”