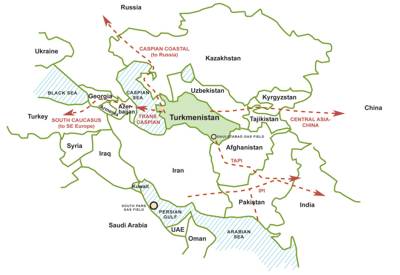 Forget official rhetoric about fighting for democracy and women’s rights in Afghanistan. It’s all about energy.

A report released June 19, 2008 by the Canadian Centre for Policy Alternatives (CCPA) offers more realistic explanations for the invasion that has cost so many lives, and the occupation that grows bloodier every day.

A Pipeline Through a Troubled Land: Afghanistan, Canada and the New Great Energy Game documents the proposed Turkmenistan-Afghanistan-Pakistan-India (TAPI) pipeline, which will transport natural gas 1,680 kilometres from southeast Turkmenistan through southern Afghanistan, to Pakistan and India.

The report, written by international energy economist and former lead economist of PetroCanada John Foster, describes the U.S.-backed pipeline as turning Afghanistan into “an energy bridge” between Central and South Asia.

By citing official sources, the report provides a powerful antidote to the war propaganda emanating from Ottawa, Washington and such leading journalistic founts of wisdom as the editorial board of the Winnipeg Free Press.

Richard Boucher, U.S. Assistant Secretary of State for South and Central Asian Affairs, said in September 2007: “One of our goals is to stabilize Afghanistan, so it can become a conduit and a hub between South and Central Asia so that energy can flow to the south. . . . and so that the countries of Central Asia are no longer bottled up between two enormous powers of China and Russia, but rather they have outlets to the south as well as to the north and the east and the west.”

Light was also shed by U.S. Ambassador Thomas Pickering, co-chair of the blue-ribbon Afghanistan Study Group in Washington, D.C. Interviewed on CBC’s As It Happens (January 30, 2008), he said: “Afghanistan is of strategic importance, a failed state in the middle of a delicate and sensitive region that borders on a number of producers of critical energy.”

The 17-page report is available for download as a 3.9 MB PDF file. You can get it here. Perhaps after you’ve read it you could pass it on to your local Member of Parliament and the families of any Canadian soldiers you know who have been deployed to Afghanistan.