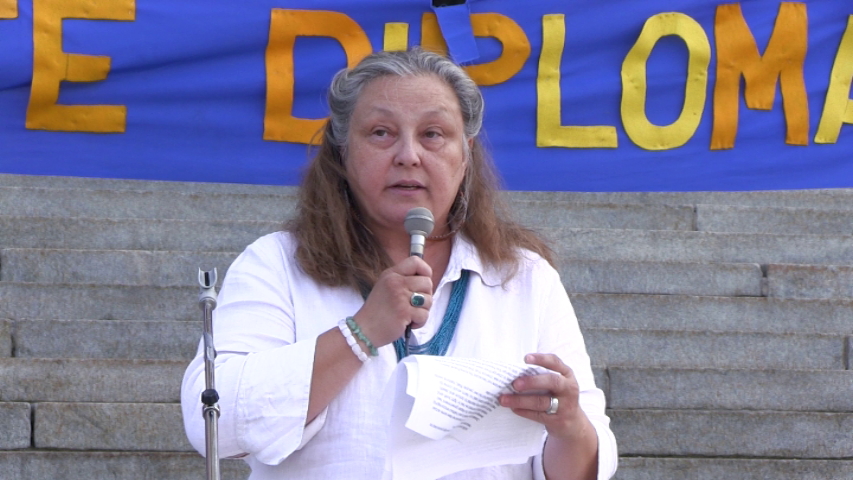 I am here today on behalf of the Manitoba Peace Council, an affiliate of the World Peace Council established in 1949. We’re an anti-imperialist peace organization with a long history in Canada. I am currently the Aboriginal Rep on the executive of the Canadian Peace Council, and the relationship between nations is especially important for me.

Speaking here is very meaningful for me as I just attended a presentation by the Chilean community on the 40th anniversary of the American orchestrated coup of the democratically elected Allende Government. Many Chileans are here with us today. We have learned nothing from history if we allow further interventions into sovereign nations as Syria.

One of the stupidest scenes of the past week in this rush to war shows exactly how much concern for the Syrian people and the rule of law the American leadership has: Senator John McCain playing poker on his phone during committee hearings to decide if the US government will back Obama’s push for missile strikes. When caught on tape, and asked if he thought that was appropriate, McCain laughed and said the “saddest part was I lost thousands of dollars”. What an odious weasel.

Canada under Stephen Harper is becoming one of the most aggressive countries on earth. People had thought that the danger of war had disappeared when Obama was elected, but here we are trying to prevent another Arab country being torn apart by another US war.

We may be looking at missile strikes now against Syria which will only prolong the civil war, but the overall goal of western countries has been for regime change in Syria. Prolonging the war is the worst option and a great catastrophe for the Syrian people.

The struggle against the Assad regime has been hijacked by forces outside of the country who do not want a free and open democracy or equality for people but to bind them up in sectarian strife, in thrall to different masters. The West wishes to rush in and like a Lawrence of Arabia control the destiny of the Syrian people and the whole Middle East carving up and redrawing the map until the resources and the labour is all in their control and not at the service of the people whose land it is.

The peace movement went to sleep when Obama was elected. Now we’re all facing a very serious threat of escalating and expanding wars of aggression. We have to realize missile attacks are just a start. Once a battle begins it must be followed through to the end. The war can only get more serious, perhaps killing millions of Syrian people.

We thought that George W Bush was a scary guy until we got to see with what glee Obama commits murder: drones, targeted assassinations, extra-judicial killings, intrusions onto foreign soil without warrant , continuing illegal wars of aggression, detaining in tortuous condition prisoners with no charges, threats of aggression, every one a violation of international law. Obama swaggers through the world as if he is the sheriff of Dodge at high noon, but with no justice or mercy. The US is not enforcing international law or even commonly held universal beliefs. The US picks and chooses who to bully by what they can gain at any moment.

Obama is not the friend of the Syrian people looking to even the odds or protect the weak.

The truth of this matter we have before us today is this: a US-led missile attack is not a humanitarian response to the use of chemical weapons in Syria. There has yet been no clear proof of who used chemical weapons and once again a US administration and US media is vehemently asserting they have the proof the UN investigators do not have, that the Syrian government is responsible. Only a small number of Imperialist countries including Canada want to use missiles against the Syrian people. It is these Imperial nations that do not recognize the sovereignty of nations and will act outside of international law and morality to further their own selfish aims.

The main source of danger in the Middle East is the US, but we as Canadians have done our fair share of bullying and meddling for profit. We Canadians must keep our country out of armed aggression in foreign affairs.

We have no mandate to spread so-called democracy elsewhere when we have so precious little of it here at home. Our internal policy of ignoring and exploiting the Aboriginal Peoples of Canada has been nothing other than genocide that continues in our blanket racism and public policy to this day. We have no moral high ground and no resources to squander on foreign lands.

Canada is the 3rd largest investor in Syria and we have some actual leverage with that country if we wanted to use it without encouraging missile strikes. A few short years ago, the Harper government had such confidence in the Assad government we in Winnipeg had to fight tooth and nail to keep a young man from being deported to torture and death in Syria. The Harper government openly said no harm would come to him, that it did not think Assad hurt his own people, that nations were sovereign and made their own rules.

The Harper government sings a new tune not because its eyes have been opened but because there is a real chance that the people across the Middle East may be ready to change their own governments, make their own way; not just change the Head of State but push out foreign domination as well. With a large slice of Syria in their pockets why would our multinationals let real change happen? It wouldn’t be good for their business.

Close at home we are in danger and must keep pressure on our own government to do the right thing and not make matters worse. We have a brown-nosing, boot-licking, toady of a Prime Minister in thrall to the oil companies and the US, grimly stifling his own party and willfully proroguing Parliament whenever a tough question comes his way. He is no model of democracy, justice, fair-play or intelligence, and under his leadership Canada has no moral power. Stephen Harper listen to the cries of your own people for justice and fairness before you go off in any lynch mob with Obama and his ilk.

The immediate problems of Syria must be dealt with by dialogue and mediation between all the sides that have a legitimate stake in Syrian politics. Negotiations with the help and participation of the United Nations and sanctions to keep them talking are preferable. This will not make a paradise of Syria but it is the appropriate step. Only a united Syrian working class willing to over throw the tyranny of both Syrian elite and foreign powers will eventually create a society where all people can be equal. There is no democracy without true equality and freedom for every person under the law. Not in Syria, not in Canada, not in the United States.

Cheryl-Anne Carr delivered this address at the September 7, 2013 rally in Winnipeg in support of peace in Syria. To see video of this event, click here.

← Syrian peace will not come from US bombs
Video: Winnipeg Peace in Syria Rally →

1 comment for “The West hijacked the Syrian struggle for democracy”