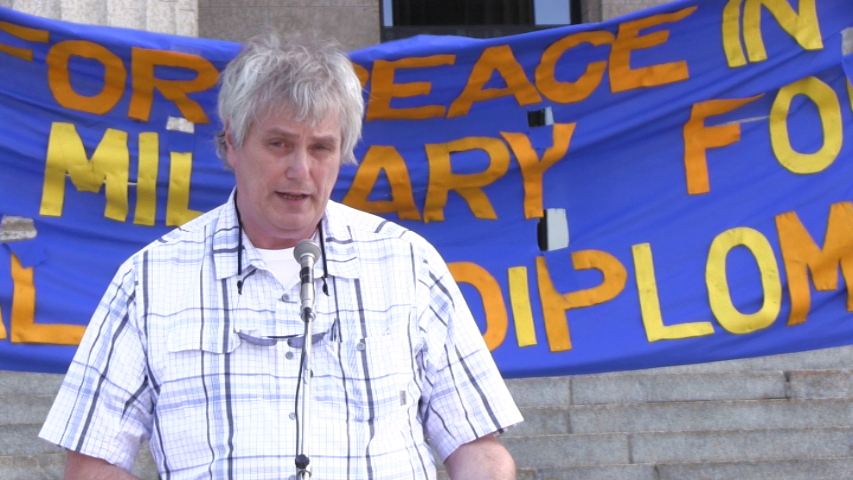 Across Canada and in cities in around the world people are demonstrating today against the threat that the United States that it will take military action against Syria and thus widen an already destructive civil war that has claimed thousands of lives, forced thousands into refugee camps and emboldened destructive forces in Syria who are using the Syrian people as cannon fodder.

When we demonstrate against the threat of U.S bombing we are not blind to the suffering of the Syrian people or indifferent to their struggle against internal reaction. The Syrian people have the right to determine their future for themselves and to build their country as they see fit. But this right will not come from the bombs of the U.S. Nor will it come from the interference of the U.S., Britain, Canada, France and Saudi Arabia to fuel civil war with arms and foreign fighters. This right will not come from Russia which for decades considered Syria its client state in the Middle East to protect its interests in that region against the maneuverings of the United States.

Since the events that led to the second Iraq war in 2003 there has been a rise in people’s consciousness that might does not make right. More than ever people are aware that when the U.S., Canada and Britain speak of “humanitarian” intervention it is entirely self-serving and aimed at preserving their military and economic domination in areas such as the Middle East.

The doctrine of “right to protect” advocated by Lloyd Axworthy, Stephen Harper, Barack Obama and David Cameron is the smokescreen to advance imperialist interests and ambitions. The people of Iraq suffered almost a million deaths at the hands of these humanitarians since 1991. The people of Afghanistan: over 100,000 dead since 2001. Libya fared no better and now Syria is the target. The doctrine of “right to protect” is literally built on crushing people and nations underfoot.

At his press conference at the conclusion of the G20 Summit Stephen Harper said that “humanity will regret” inaction if nations do not respond to the use of chemical weapons. He went on say that this was a dangerous precedent unheard of in modern times. He conveniently forgot when Saddam Hussein was a staunch American ally that Iraq used chemical weapons in its war against Iran and against the Iraqi city of Halabja immediately killing at least 3,000 people.

Chemical weapons are a weapon of war – the cruise missiles that the U.S may launch will kill more people than those killed on August 21 in Syria. Weapons of war are many and varied but their end result is the same. Harper neglected to mention the use of phosphorous weapons against the people of Fallujah and the people of Gaza. He also neglected to mention the use of depleted uranium weapons by NATO in Afghanistan and the U.S. in Iraq. Harper also neglected to mention that sanctions against Iraq — which prevented the delivery of medical and other essential items to civilians– resulted in the deaths of over 100,000 men, women and children. The Canadian government — to its shame — was one of the most zealous proponents of sanctions often refusing to allow any easement when requested by humanitarian agencies. So much for the concern of the humanitarian Stephen Harper! And that is why the outcry from Obama and Harper is so phony.

Thus, it is entirely possible that the use of chemical weapons in Syria was an act of foreign powers to create the pretext for full-blown intervention by the U.S in concert with its allies

Harper’s humanity is that of plunder, profit, control and domination of peoples. However, there is another humanity. Since the mass mobilizations against Bush’s war in Iraq people have increasingly seen through these ploys. They do not support war and intervention as an international norm. Certainly the experience of Canadians with the official lies surrounding Canada’s war in Afghanistan have eroded the ability of Canadian governments and political parties to beat the war drums. We saw that in Britain; what ten years ago would have been a sure vote to go to war ended in defeat for Cameron and disrupted Obama’s drive to war.

One of the reasons for this day of action is to show that Canadians do not support the further escalation of violence in Syria. The Syrian people have been the victims of foreign interference. Canada has played a major role in this. The result is the disaster we seen in terms of loss of life and the humanitarian crisis. This foreign interference has also made it impossible for Syrians to find any internal solutions.

We have not just demonstrated. Over a year ago when the situation in Syria first gained international attention Winnipeggers assisted the Syrian community in humanitarian efforts.

In conclusion what we must do is build the movement to stop both aggression and interference as the norm of international relations. This means building a movement for real democracy and change. On October 8th at 7 pm there will be a forum to discuss this very issue as it applies to our experience in Canada. It will be a Broadway Disciples United Church.

This article is the text of the address given by Glenn Michalchuk at the Sept. 7, Peace in Syria Rally, held in Winnipeg.To see video of this event, click here.

1 comment for “Syrian peace will not come from US bombs”