France is knocking on Canada’s door seeking assistance for its intervention in Mali, and Canada’s door seems to be open a crack. Besides providing the French military, a military transport plane, at least temporarily, Foreign Affairs Minister John Baird says Canada wants to offer both humanitarian aid and “support for the restoration of democracy.” This will come as a pleasant surprise to many Malians. 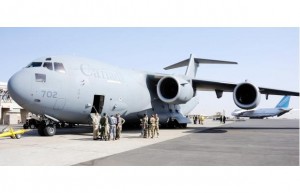 Canadian Forces C-17 Globemaster III crew members meet with members of the British, French and Malian militaries upon their arrival in Bamako, Mali, on Thursday, Jan. 17, 2013. The heavy-lift military transport plane touched down on Malian soil for the first time Thursday carrying a French military armoured vehicle among other things. Photograph by: Sgt Matthew McGregor, THE CANADIAN PRESS

Those who care deeply about the plight of Mali, including Canada’s role there, should read Joan Baxter’s revelatory book Dust From Our Eyes: An unblinkered look at Africa. Ms. Baxter, a Canadian journalist who lived in Africa for two decades, witnessed first-hand the contempt, cynicism and implicit racism that characterizes the way so many western governments and corporations regard Africa.

Sad to say, this indictment applies in substantial part to Canada. As the Mali crisis has garnered attention, too many media reports have lazily peddled government propaganda about Canada’s long and apparently constructive relationship with a democratic and developing Mali. Much of this is self-serving hooey. Mali ranks 175th of 187 countries on the UN’s 2011 Human Development Index, has grown obscenely unequal in the past decade, and its democracy resembled a Potemkin’s village.

But what Mali does have is gold in the south, much of it being mined by Canadian companies, and the hope of oil in the north. Canadian aid to Mali totalled $110 million last year, before the coup against the government, but how much ever got to help poor Malians is impossible to know; CIDA’s website is particularly unhelpful. No doubt some did. More persuasive, however, is Joan Baxter’s research, since she was there and spoke to everybody.

In a telephone interview from her present home in Nova Scotia, Ms. Baxter said that much Canadian government interest in Mali in recent years focused on its gold and oil, and both CIDA and our diplomats worked assiduously to make life easier for Canadian mining companies. Despite all the usual PR mumbo-jumbo about Corporate Social Responsibility, Ms. Baxter saw that these companies care infinitely more about their share prices than about the Malian people, a truth reflected in the extremely generous tax holiday granted by the deposed neoliberal government.