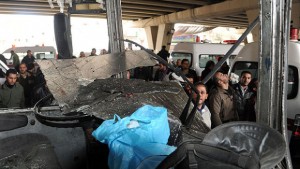 People gather at the site of a powerful explosion that hit the Midan neighborhood in the heart of Damascus on January 6, 2012 as state media said a suicide bomb attack ripped through the Syrian capital, killing or wounding "dozens." (STR/AFP/Getty Images)

“War with Iran is already here,” wrote a leading Israeli commentator recently, describing “the combination of covert warfare and international pressure” being applied to Iran.

Although not mentioned, the “strategic prize” of the first stage of this war on Iran is Syria; the first campaign in a much wider sectarian power-bid. “Other than the collapse of the Islamic Republic itself,” Saudi King Abdullah was reported to have said last summer, “nothing would weaken Iran more than losing Syria.” [1]

By December, senior United States officials were explicit about their regime change agenda for Syria: Tom Donilon, the US National Security Adviser, explained that the “end of the [President Bashar al-]Assad regime would constitute Iran’s
greatest setback in the region yet – a strategic blow that will further shift the balance of power in the region against Iran.”

Shortly before, a key official in terms of operationalizing this policy, Under Secretary of State for the Near East Jeffrey Feltman, had stated at a congressional hearing that the US would “relentlessly pursue our two-track strategy of supporting the opposition and diplomatically and financially strangling the [Syrian] regime until that outcome is achieved”. [2]

What we are seeing in Syria is a deliberate and calculated campaign to bring down the Assad government so as to replace it with a regime “more compatible” with US interests in the region.

The blueprint for this project is essentially a report produced by the neo-conservative Brookings Institute for regime change in Iran in 2009. The report – “Which Path to Persia?” [3] – continues to be the generic strategic approach for US-led regime change in the region.

A rereading of it, together with the more recent “Towards a Post-Assad Syria” [4] (which adopts the same language and perspective, but focuses on Syria, and was recently produced by two US neo-conservative think-tanks) illustrates how developments in Syria have been shaped according to the step-by-step approach detailed in the “Paths to Persia” report with the same key objective: regime change.

The authors of these reports include, among others, John Hannah and Martin Indyk, both former senior neo-conservative officials from the George W Bush/Dick Cheney administration, and both advocates for regime change in Syria. [5] Not for the first time are we seeing a close alliance between US/British neo-cons with Islamists (including, reports show [6], some with links to al-Qaeda) working together to bring about regime change in an “enemy” state.