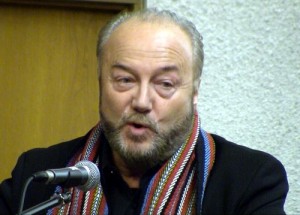 Glenn Michalchuk, chair of Peace Alliance Winnipeg, which organized the event, presented Galloway with a gift: a Metis scarf which Michalchuk said symbolized struggle of a people for self-determination. Galloway donned the scarf with evident pleasure and launched into his speech with an energy that belied the fatigue he was feeling as he neared the end of an 11-city cross Canada tour that stretched from Halifax to Yellowknife.

Galloway repeated his pledge to donate “every cent” of the compensation he expects to result from his defamation suit against the Canadian government to the Canadian anti-war movement. He also announced plans to launch a Canadian wing of Viva Palestina, in Calgary, next year. Viva Palestina is a registered UK charity that Galloway helped found that has raised millions of dollars in humanitarian aid for the people of Gaza.

Galloway is a frighteningly talented orator. It is easy to understand why Immigration Minister Jason Kenney would want to keep him out of the country. He spoke knowledgeably, passionately, with great warmth and biting wit, and without notes, for just over an hour. (My favourite example of his savage wit was a passing reference to Harper and Ignatieff as “Tweedle Dee and Tweedle Dum . . .two cheeks of the same backside” — but I digress.)

Here are only a few of the highlights.

On Kenney’s attempt to keep Galloway out of Canada

“As any bookseller could have told Mr. Kenney, any book that you try to ban usually ends up on the best-seller list.”

“Though the offence against me was considerable, the offence against you was much, much more serious, because what it established and what Justice Mosley’s 60-page caning of Kenney — across a 60-page judgement — what was established was that you have a government of liars and deceivers who are planning to take your rights away.”

On racism, Antisemitism and Zionism

“That somehow I might be a hater of Jews, or in other words, a racist, is as absurd as it is insulting and offensive.”

“We are against the racist, apartheid ideology of Zionism and its practise in the apartheid state of Israel.”

“When people campaigned to end communism in Russia it didn’t mean they wanted to end the people of Russia. It didn’t mean they wanted to eliminate the country of Russia.They were against a political ideology which they believed was wrong and harmful. And that’s the spirit in which we say we are against Zionism. We’re not against the Jewish people who live in the land they call Israel and we call Palestine. We’re against the idea that there can be an apartheid state created there where the non-Jews are second class citizens and where the state illegally occupies and controls every aspect of the lives of three million Palestinian people living under occupation in the West Bank, in Gaza and in East Jerusalem.”

“Has anyone in Canada ever asked the question how come the Afghan army needs quite so much training? For ten years they’ve been trained by the occupation armies that invaded and occupied Afghanistan . . . The cost of training Hamid Karzai’s puppet regime, paid for by western taxpayers including every one of you,  is $1 billion per month . . . with no noticeable improvement in their performance. Nobody’s training the Taliban and they’re doing quite well.”

“The Afghans are quite good at fighting. They don’t need much training. And they will never accept the foreign occupation of their country. Full stop.”

“Bush and Blair and Harper and, I dare say Kenney, are willing to fight to the last drop of other people’s blood and that’s just immoral.”

“I don’t like Stephen Harper. I wouldn’t have voted for him. But I can’t pretend that he’s not the Prime Minister of Canada. I can’t appoint somebody else as the Prime Minister of Canada though the vision of Michael Ignatieff just flitted across my mind. Talk about Tweedle Dee and Tweedle Dum. Two cheeks of the same backside. I can’t appoint Ignatieff or Layton of anyone else as the leader of Canada. I have to accept the outcome of the elections in Canada.

“Well, as we say we’re fighting for democracy every time we go to war, the Palestinians had democracy. They had an election. It was the only, only, free, democratic election ever held in any Arab country, ever, in all history. It was described by Jimmy Carter, no less, as pristine. Pristine. Chrystal clear. Transparent. Perfect. We just didn’t like the result. So what did we do? We immediately imposed a siege to starve the children of the votes, to punish them for how their parents had voted.

“How democratic is that? That’s hypocrisy, not democracy. But that’s exactly what we did and that siege has now lasted for four long years.”

The event was endorsed by:

1 comment for “George Galloway packs the house in Winnipeg”