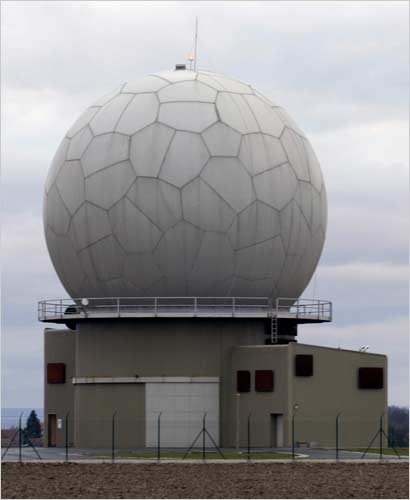 The Czech Republic agreed during the NATO Summit in Bucharest, Romania, April 3 to host tracking radar as part of the U.S. missile defense system. It will be built by 2012, according to the US government, “to protect Europe from a limited, long-range Middle East-based ballistic missile threat.” NATO air-defense radar pictured here is 85 kilometers east of Prague. Source: america.gov

Please accept our congratulations on your victory in the United States presidential election.

We address this appeal to you due to our concern for the preservation of the democratic process in the Czech Republic and for the security of the European community.

As you know, the Bush government and the Czech government have agreed to place the military radar base of the US National Missile Defense (NMD) system on Czech territory. Two thirds of the Czech citizenry do not, in the long term, agree with the arrangement. Despite their opposition, the Czech government has signed agreements with the United States that are due to be ratified shortly by the  Parliament. The current deputies were elected before there was any public discussion about the project, however, and the involvement of the Czech Republic in the NMD system was not on any Czech parliamentary election platform.

The plan to place elements of this system in the heart of Europe is causing tension between USA and Russia, as well as between USA and the European Union, and will lead to a new expansion of the arms race. We are concerned that due to this advanced system, Europe will become the main battlefield in a potential international conflict and that the Czech Republic would be, due to the radar, the target of a first attack. The matter is made even more sensitive by the fact that after the fall of communism in 1989, the Czech people vowed that a foreign army would never again be stationed on their territory.

We kindly ask you to reassess the attitude of the US government towards the placement of NMD elements in Europe and to put a stop to this very dangerous and unstable project. We hope that the change so strongly symbolized by your victory will turn into reality, that the new American leadership can move us all in the direction of a world without wars and violence, and that the tendency towards the escalation of arms and military aggression will be replaced instead by investment into areas that contribute to real human development.

We entreat you as the president of a country that has long symbolized democracy to respect the will of the Czech citizens, who are being deprived of their democratic rights by their own government.

← The Voices of Rongelap
Chagos Islanders – the exile continues →