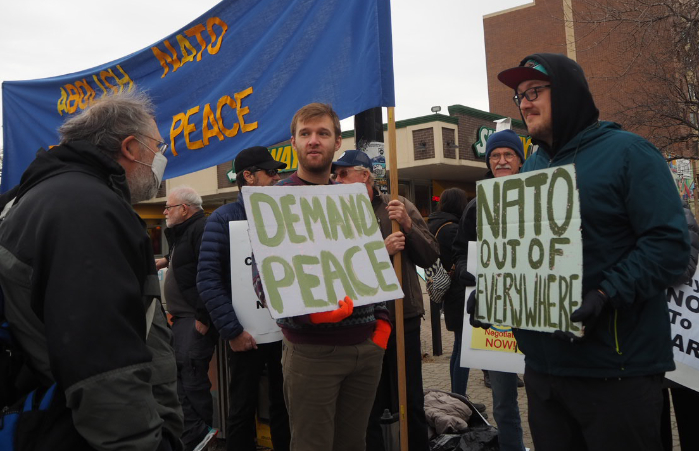 Winnipeg, Oct. 22, 2022: Winnipeggers participate in an information picket as part of a Canada-wide week of action against war and Canadian arms sales. Photo: Paul S. Graham

I have watched the events in Ukraine closely both before and after the outbreak of the war on February 24.

I have done so because of my role with Peace Alliance Winnipeg (I am its chairperson) and because of my roots –  my grandparents on both my mother and father’s side emigrated to Canada from Galicia which at that time was part of the Austro Hungarian Empire. Ukraine as a nation would not come into being until the after WW1 which saw the demise of the Austro Hungarian Empire and Czarist Russia.

For these reasons I have had many opportunities to speak and write on events as they have evolved since January 2022. For the purposes of this article January 2022 will be a good starting point, though the causes of this war also lie in earlier events.

It is clear that war between Russia and Ukraine could have been averted. It is also clear that once war broke out a ceasefire and peace negotiations were possible.

War was not averted and it has not been stopped because NATO and the U.S. were organizing for confrontation with Russia. Ukraine would be the instrument for this war. The Canadian government would support U.S./NATO plans. The large Ukrainian diaspora that had emigrated to Canada after World War 2 would lobby for confrontation with Russia, something they had hoped for throughout the period of the Cold War. Now with access to the most inner circles of government, through Deputy Prime Minister Chrystia Freeland, the objective was within reach.

The perfect political storm for war had been created. The corporate media in Canada would proceed to fuel it. Politicians of all stripes would submit. Ukraine and its people would become the proxy for the Cold War ambitions of the Western Alliance.

Peace Alliance Winnipeg had been holding regular weekly actions to oppose Canada’s purchase of new fighter jets but by January it was clear a new danger was emerging. Western governments and media began to intensify propaganda for war with Russia. Western political leaders spoke increasingly of a confrontation between the democracies of the west and the authoritarianism of Russia and China. By mid January the focus of our actions became No War With Russia and, despite 70 years of Cold War rhetoric and hostility, the mood of the street was against war.

There was an opportunity for Canada to play a role for peace. In Europe, France and Germany were engaged diplomatically with Ukraine and Russia to realize a peace in the Donbas region through the implementation of the Minsk Agreements. This would end the internal civil war in Ukraine that claimed at least 13,000 lives and displaced more than a million people (a war Canada supported). Equally important was the fact that a settlement in Donbas would defuse tensions between Ukraine and Russia.

Canada would have none of this

Canada’s Deputy Prime Minister Chrystia Freeland, speaking to an on line townhall on January 24 organized by the Ukrainian Canadian Congress (UCC) and Liberal MPs from the three Prairie Provinces, said the following: “So, to be really clear what’s at stake in Ukraine is nothing less than a fight between democracy and authoritarianism,” (Feb 1 2022, New Pathway Ukraine News).

I joined that townhall, as had many peace activists and members of the Ukrainian Canadian community, who were concerned about the danger of war in Ukraine.

It was a stage managed affair to promote the policy of confrontation and war. Those not part of the panel – made up of UCC representatives and Liberal MPs – could only participate by submitting online comments or questions which were addressed only if they favoured the narrative being presented.

Chrystia Freeland’s message of confrontation with Russia was backed up by Foreign Minister Joly who was also featured on the panel. Out of hand she dismissed the Minsk Agreements as a framework for peace and emphasised the need for ‘hard power’ to counteract Russia.

One month before war broke out the position of the Canadian government was clear – there would not be peace in Ukraine. This was echoed in the “take note” debate in the House of Commons on January 31 as MPs, with few exceptions, fell like dominoes in their stumping for confrontation with Russia. Privately some spoke of opposition but faced intense lobbying by the UCC to take a hardline and were forced to toe the line by their party.

Prior to the war, people in Ukraine favoured an end to the war in the Donbas and an improvement to the economy, every day life and an end to government corruption. They did not want to emigrate to the EU looking for jobs. Powerful forces disrupted this. The result is what we see unfolding today in Ukraine, a country torn apart by war and deeply divided. The “right of Ukraine to join NATO” – one of the reasons for this war – was artificially imposed by those who came to power in Ukraine in 2014. It was not a demand emanating from the people. The prevailing line of the West is that it is up to Ukrainians to decide but every move for peace is blocked. The opposition in Ukraine has been silenced through arrests and assassinations, and opposition parties banned.

No interest to end the war

The war drags on because of the refusal of NATO and Western powers to entertain the thought of a ceasefire and peace negotiations. As a result Ukraine has been turned into a killing ground as smug Canadian politicians pat themselves on the back for their resolve to “protect Ukraine”. The U.S has stated that one of the objectives of the war is to drain Russia’s military capabilities.

Canada has remained a steadfast opponent of peace both past and present. The Canadian Department of National Defence makes this statement on its website: “Canada has done all it can to prepare Ukraine for this fight. Since the start of Operation UNIFIER in September of 2015, the CAF trained over 33,000 Ukrainian military and security personnel in battlefield tactics and advanced military skills”. Some of that training included the neo-Nazi Azov battalion as reported on by the Ottawa Citizen newspaper several times. Since February 2022 Canada has supplied more that $600 million in military assistance to Ukraine and is now actively engaged in training new conscripts for the war.

The anti-war movement has stood up to the prevailing narrative. It has worked to oppose the lies and distortions of the corporate media. It has worked to inform Canadians of the facts. At present there is no political will in Canada to end this war – itself a dangerous sign. It rests with Canadians to take up the challenge to change the political discourse and call for an end to the war in Ukraine.