Since becoming involved in the Palestinian solidarity movement several years ago, our house has amassed a large collection of books about Palestine, including everything from Nakba history to an account of the 51 Day War to some great cookbooks. Following are just a few of my favourites.

1. The Ethnic Cleansing of Palestine by Ilan Paape

A definitive history of the Nakba, from its beginnings, to present day, this is the first book I ever purchased and read on Palestine and it changed everything for me. It’s a primer really, featuring painstaking detail on the Nakba, U.N. Partition Plan, Six Day War up to the present day. Paape, who is Jewish and Israeli-born, also includes a segment on Canada Park [developed by the JNF on Palestinian land with donations from Canadians] and Israel’s use of what he terms “memoricide” to erase Palestinian presence from the land.

2. The Palestinians from Peasants to Revolutionaries by Rosemary Sayigh [First Published 1979]

A real treasure, this book is the result of Sayigh’s field work in Lebanon where she interviewed countless Nakba survivors in the 1970s. The new edition also features an introduction by Noam Chomsky.

3. Palestine: A Guide by Mariam Shahin 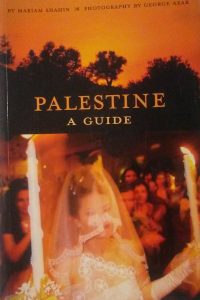 A big, beautiful book, with loads of colour photos of Palestine and its people. This book is so unique, it includes a wealth of cultural history, such has facts about Palestinian embroidery, food and folklore, but also provides a narrative about the Nakba and ongoing loss of land. The author even includes detailed descriptions of every village destroyed during the 1948 Nakba. I actually discovered this book years ago at McNally Robinson Booksellers in their travel section.

4. Palestine in Pieces Graphic Perspectives on the Israeli Occupation, by Kathleen and Bill Christison [Pluto Press] 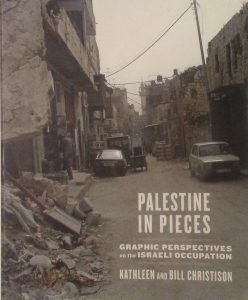 This book is most striking for the more than 50 amazing photographs [including many of the Apartheid Wall] that the authors took to document Israeli occupation and resistance. One photo in particular, of a home that was actually incorporated into the wall, is particularly shocking. In Palestine in Pieces the Christisons reflect on their many trips to Palestine and the impact of the Apartheid Wall on the lives of everyday Palestinians. I found the segment on Zionism, where the couple compares life in Palestine to life in Apartheid South Africa especially relevant. The authors include many maps of the region to illustrate the occupation and the disappearance of Palestine. The Christisons also include a chapter on home demolitions. The authors dedicated Palestine in Pieces to ICHAD founder Jeff Halper and activist Rachel Corrie. 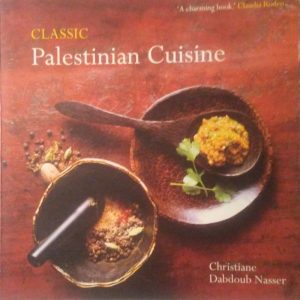 At first glance, Classic Palestinian Cuisine may seem just like another cookbook but it is much more than that. While the author includes many traditional [and delicious] recipes and beautiful colour photographs, she also describes how the occupation has impacted Palestinians’ access to traditional healthy food and the erosion of Palestinian agriculture. Dabdoub Nasser also includes detailed information on the historical significance of each dish to Palestinians.

6. Drinking the Sea at Gaza Days and Nights in a Land Under Siege, Amira Hass [1996] 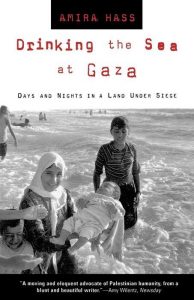 In 1993, Amira Hass was the first Jewish Israeli journalist to live in Gaza. Drinking the Sea at Gaza is the story of her time there. Hass describes for the reader her upbringing and how she was raised with her parents’ socialist view of justice. She tells the reader that a local phrase Israelis would use, “Go to Gaza,” was another way to say “Go to Hell,”. She explains how distorted the popular image of Gaza was as “savage, violent and hostile to Jews,”. She also recalls how her idea, to move to Gaza, was seen as “outlandish, even crazy,” by most Israelis.

However, Hass goes on to tell readers how she felt at home in Gaza, and where her decision to move there came from:

“In the end, my desire to live in Gaza stemmed neither from adventurism nor from insanity, but from that dread of being a bystander, from my need to understand, down to the last detail, a world that is, to the best of political and historical comprehension, a profoundly Israeli creation,” Hass writes.

I recently found both of these at the Winnipeg Public Library and if you get the opportunity, both films are definitely worthwhile watching. 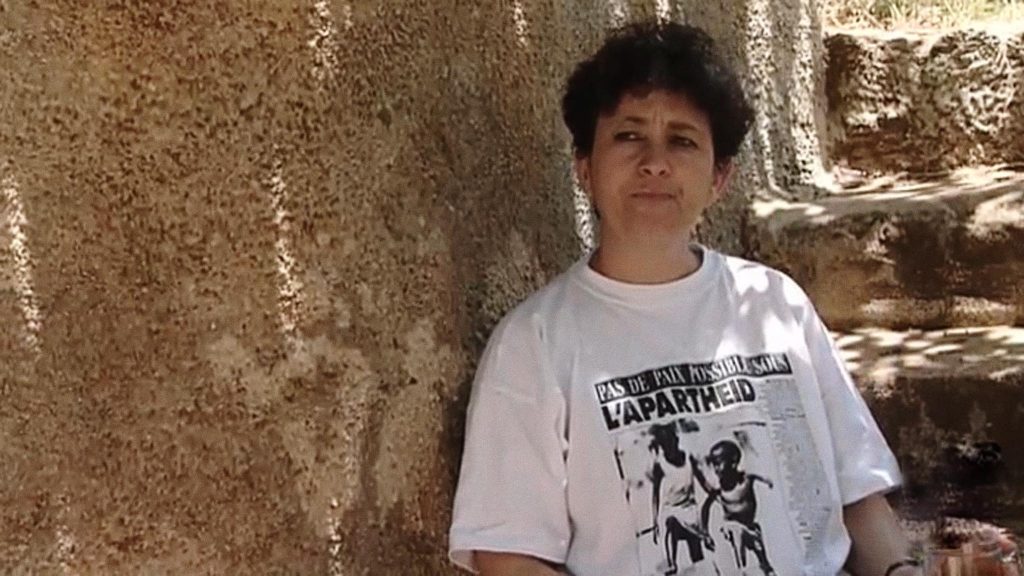 This National Film Board piece from 2004 was directed by Tahani Rached. In Soraida Woman of Palestine, we see glimpses of women and men living their every day lives under occupation.

This film is particularly interesting because it takes place as Israel’s 26-foot high Apartheid Wall is still under construction and we travel with Soraida Abed Hussein and her friends to a protest at the barrier.

“I am a woman. A Palestinian living under occupation,” Soraida says, recounting her activism in Palestinian solidarity movements before her children were born.

She explains that although she condemns and rejects the violence of suicide bombers, she asks herself if her attitude would change if the Israelis demolished her home. 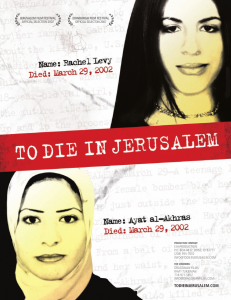 Ayad al-Akhras, a young Palestinian woman blows herself up in a Jerusalem market, killing herself and Rachel Levy, a young Israeli woman. To Die in Jerusalem is the story of the two women and their families, it also addresses the critical role of children in resisting Israeli occupation. To Die in Jerusalem depicts a mother’s journey to meet the mother of her daughter’s killer. The two women finally speak several years later through a satellite interview.

“Where there is occupation, there is resistance,” Ayad’s mother says, pointing out that Israelis don’t live under occupation and that Palestinians are banned from praying at Al-Asqa Mosque. Ayad and her family live in a refugee camp.

Meanwhile, Rachel’s mother is adamant, saying “No mother would allow their daughter to do that.”

To Die in Jerusalem takes place in a time, where, like Soraida, Woman of Palestine, the Apartheid Wall is still under construction and Palestinians are fighting for their right to pray at al-Asqa.

During the course of the story the filmmakers also visit a women’s prison and interview female suicide bombers.

The film ends on the question, “How will peace emerge?”