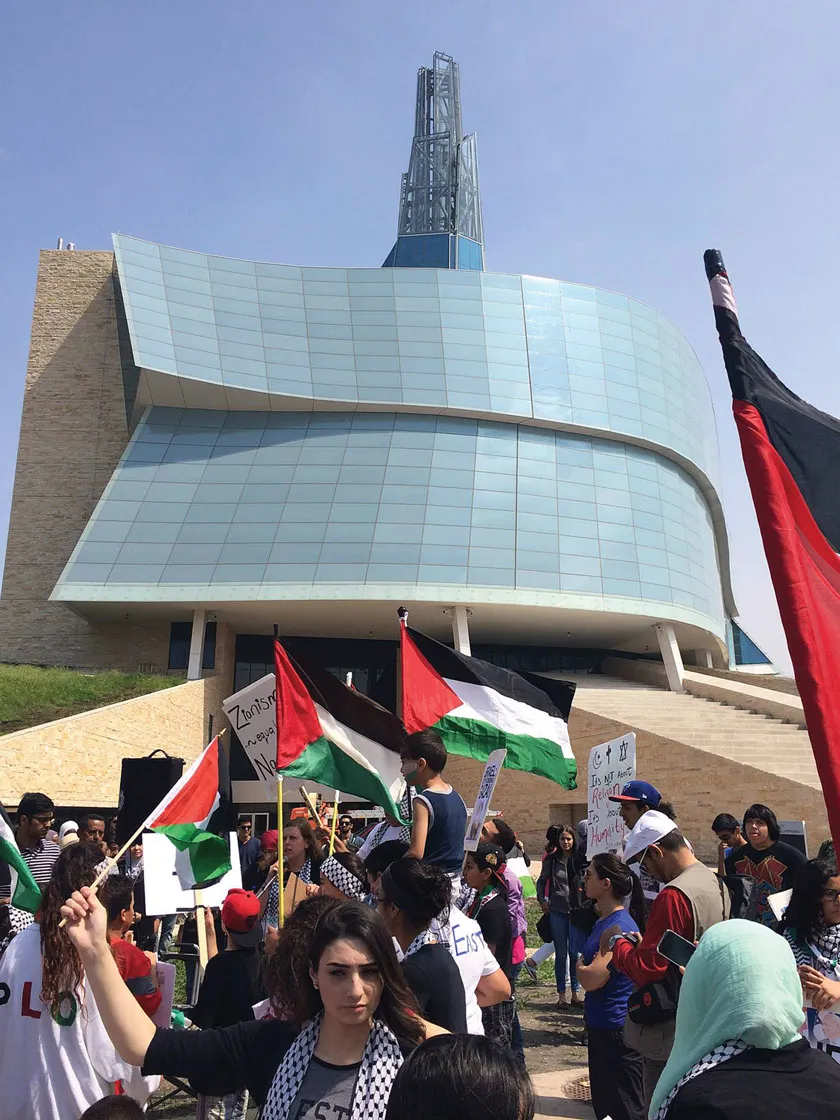 RANA ABDULLA has waited nine long years to have her story told in the Canadian Museum for Human Rights (CMHR). Before the museum was even built, the CMHR put out a request to Canadians for content ideas. Abdulla, who is an artist, Palestinian Canadian activist, and co-owner of the Yafa Cafe restaurant with her daughter Sarah in Winnipeg, was one of many Canadians who submitted their human rights stories. Abdulla’s story, as the child of Palestinian refugees, was rejected at the time.

Beginning in 2011, Abdulla started writing letters, sending emails, making phone calls and requesting meetings with CMHR officials. At the time the requests by Abdulla, a recipient of a Human Rights Commitment Award, went unanswered. Abdulla persevered and in 2013, she began collecting the stories of other Palestinian Canadians.

“As the opening comes closer, I become more and more concerned that the lessons of the Palestinian experience, nobody’s going to hear it,” Abdulla said in an interview about the museum with CBC TV in 2013. After that interview aired, the head of the museum’s stakeholder relations, Clint Curle, finally reached out and agreed to meet with her and also apologized for not responding to her previous requests.

Abdulla, who represented the Palestinian Canadian Congress (PCC) at the meeting with Curle, presented samples of Palestinian personal histories and eye-witness accounts. She offered to donate materials and ideas to support Palestinians’ displays. At one of the meetings she attended, she was also accompanied by two Nakba survivors.

Dr. Ismail Zayid, from Halifax, presented another Palestinian submission about Canada Park and Canada’s complicity in war crimes. Canada Park is an Israeli national park built on top of three ethnically cleansed Palestinian villages. Yet, Abdulla said that this clearly had no effect on Clint Curle.

“We are looking for equal reference to the cases that are being featured,” Abdulla said, adding that she and the PCC offered to work with the museum on building a credible human rights museum, which is truly inclusive and equitable in all aspects.

Even though Abdulla said she believed she was making progress in her communications with the CMHR, she eventually learned that she had received a standard form letter also sent to other groups that were meeting with the museum about content.

In the end, Abdulla felt the meetings she had with the CMHR had no impact. She confirmed there was no substantial standing exhibit on Palestinian human rights issues at the museum’s eventual opening in September 2014 and asserted that the displays were skewed to favor the Conservative government’s narrative on human rights.

“The ideas the museum presented lacked a true depiction of the realities of Palestinian human rights violations in history,” she lamented. At the time, the museum seemed to be more interested in stories about Palestinian and Israeli children playing soccer together than they were about a detailed account of the Nakba and stories of the survivors.

Curle’s proposal was to focus on a “conflict” and “dialogue” instead of the occupation, which sidesteps the issue and blurs human rights concerns. Abdulla argued the Palestinian human rights case must be present in the CMHR because it reflects the history not only of Palestine and Israel, but also the complicity of Canada and other U.N. member states in allowing human rights violations.

The CMHR was a dream of Winnipeg business mogul Israel Asper, who died in 2003. The museum was established under an amended Museum Act, as a national self-governing Canadian crown corporation during Stephen Harper’s Conservative government in 2008. 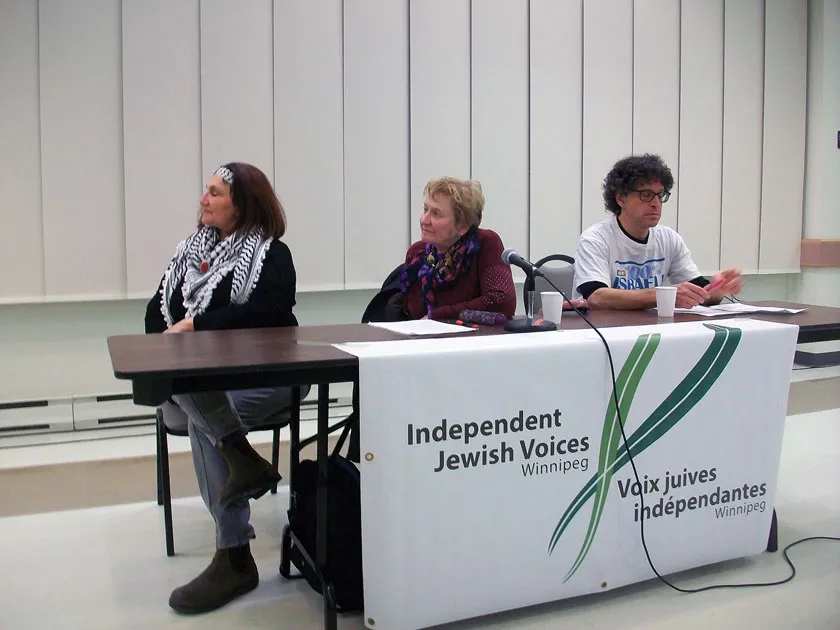 (L-r) Rana Abdulla, Suzanne Berliner Weiss and Harold Shuster in March 2020, speaking at a Winnipeg book launch of From Holocaust to Resistance My Journey, by Weiss. (PHOTO COURTESY LAWRENCE SUTHERLAND)

While the CMHR was initially intended to be a Holocaust museum, today it does include other human rights stories. Asper’s daughter, Gail Asper, currently sits on the CMHR board of directors and is also president of the Asper Foundation, which originally spearheaded the creation of the CMHR. Asper also serves on the Executive of the Board of Governors of the Hebrew University of Jerusalem.

Currently, “Examining the Holocaust” is the largest gallery within the CMHR, while the stories of Palestinians and the Nakba are noticeably absent. The Ukrainian Holodomor, Armenian Genocide, Rwandan Genocide and Srebrenica Genocide in Bosnia are also presented in a separate gallery called “Breaking the Silence.” (Ironically, this is the name of the project that encourages Israeli soldiers to talk about their military’s violations of Palestinian human rights.) The Holocaust is also included in those exhibits.

Before the museum officially opened its doors in 2014, museum staff did say it might address Palestinian issues through an art project or include a story about someone who fights for Palestinian rights, but today the institution still refuses to use the term Nakba in any of its exhibits.

Over the course of three years, Abdulla succeeded in collecting a Toronto-sized telephone book of memoirs and eye-witness testimonies that could be used by the CMHR in an exhibit on Palestine. That has yet to happen. “Palestinian Canadians feel we have been shut out of the museum,” she said.

When the museum finally opened in Winnipeg in September 2014, there were celebrations and protests. At the time it was not only Palestinians, but other groups who believed the CMHR was not inclusive. For example, members of Canada’s Indigenous community protested the fact that many of their communities live without clean drinking water. The Indigenous protesters also pointed out that the CMHR, which is the first national museum to be built outside Canada’s capital region, Ottawa-Hull, was built on the remains of an Indigenous village.

Before construction of the building began archaeologists pushed to excavate the proposed museum site located at the Forks National Historic site. Although an excavation did take place, it was cut short so that construction could begin and, as a result, only 3 percent of the site was excavated. According to Dr. E. Leigh Syms, curator emeritus of the Manitoba Museum, “There had been some public concern at the time that the museum should not have been there at all.” Canada and Manitoba lost an opportunity to recover, develop and present a unique and remarkable record of First Nation’s history and heritage.

Although in 2019 the CMHR officially recognized that genocide was committed against Canada’s Indigenous peoples, in June 2020, the CMHR was called out for its anti-Indigenous racism. Indigenous staff members also reported instances of harassment and mistreatment by management. Additionally, there were reports of prevalent anti-Black racism, sexual harassment, and accusations that CMHR staff were asked to shield exhibits about LGBTQIA rights from school tour groups.

John Young, who was the museum’s CEO at the time, resigned because of the controversy, and while the CMHR searched for a new senior executive, they hired a lawyer, Laurelle Harris, to complete an outside review to address racism, homophobia and sexual harassment at the institution.

In August 2020, the CMHR issued a report entitled “Rebuilding the Foundation,” outlining its immediate steps to address the inequities at the museum. There were 44 recommendations in the report including an action-based apology to Black and Indigenous people, creating a Black Canadian History tour at the museum, as well as specifying that tours about Indigenous content are to be delivered only by Indigenous people. There was no mention of Palestine in the report.

“It was supposed to be an example for the rest of the world of the way in which Canada could become an example for human rights. As a federal museum, its mandate is a fundamental part of how this institution would represent the fabric of a society, its values, and aspirations. I don’t believe management, or the board, has a new understanding of what that meant given what was done,” said Gabriela Aguero, who began working as an interpretive program developer at the CMHR in 2018.

Aguero, an Argentine artist, experienced harassment while working at the CMHR and also developed PTSD. “This is a clear example of colonization at its best,” she said.

Aguero added that although the CMHR does recognize the genocide against Canada’s Indigenous peoples, it is not presented that way in the museum’s galleries.

“In fact, most of the management is simply White. Class, race and gender and the hiring practices that go with reproducing privilege, especially in roles in which decisions are made, need to be changed,” she said.

She explained that at museums in Argentina there is an effort to curate at a grassroots level with respect and dignity. “I never saw that there (at the CMHR). It was more of a showoff, of resources, design and tricks than careful consideration for the ethical implications of the exhibits,” she said, referring to a recent exhibit about the Rohingya that featured huge nameless photographs of victims, about which she complained to management.

The recent management overhaul has put a new CEO in place to lead the museum. Isha Khan is Canadian Pakistani and the first woman and person of color to hold the position on a non-interim basis.

She said the purpose of the museum should not be to become a complete catalogue of human rights atrocities around the world. Instead, Khan said, the goal of the museum is to inspire all people by sharing diverse examples of stories that illuminate different human rights themes. She pointed out that the CMHR does, in fact, reference the Nakba, although not by name, in a timeline in its introductory gallery, and contains an exhibit in the “Rights Today” gallery about Dr. Izzeldin Abuelaish, the Gaza doctor who lost three daughters and a niece when Israeli shells hit his home in 2009.

“As we consult further with Palestinians and other communities, I believe we will find that there are many opportunities for us to lift up the stories of many,” Khan said.

Abdulla is hopeful about Khan’s appointment and has already written to the new CEO about including Palestinian content in the museum. She said that given the CMHR’s new leadership, she is ready to meet yet again to talk about meaningful Palestinian representation within its walls.

Candice Bodnaruk has been involved in Palestinian issues for the past 14 years through organizations such as the Canadian BDS Coalition and Peace Alliance Winnipeg. Her political action started with feminism and continued with the peace movement, first with the No War on Iraq Coalition in 2003 in Winnipeg.
—————
This article was originally published here by the Washington Report on Middle East Affairs. It is reposted here with the permission of the author.