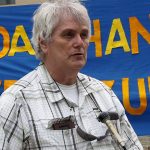 The onset of the COVID-19 pandemic created difficulties for all organizations in terms of carrying on their regular work. Due to these difficulties, it was not possible to hold an AGM last year. However, with the spread and use of on-line meeting platforms we are able to hold the Peace Alliance Winnipeg AGM today.

2019 was the last year unaffected by the gathering and meeting restrictions imposed by the health measures necessitated by the pandemic.

Building on our partnership with Regina Peace Council, which began in earnest with the formation of the Prairie Peace Partnership at the 2018 PAW AGM, Peace Alliance Winnipeg was able to host Andre Vltchek, an American/Russian journalist, film maker, author, in April 2019. He gave an important talk on “NATO, Canada and Western Imperialism” at the University of Winnipeg.

Andre published an interesting follow up to his visit (it was his first exposure to Canada) in piece titled “In the Small Canadian City of Regina, Resistance is Brewing.” Part of his experience in Canada was the plight faced by First Nations.

He planned to return to Canada to do a documentary on the effects that colonialism still visits on the lives of First Nations but, sadly, in 2020 he passed away under circumstances still not fully explained.

In June 2019 the Annual Walk for Peace was held and it focused on the growing dangers being created internationally as Canada, the US, NATO and the western alliance escalated confrontation with Russia and China and continued with aggressive plans for regime change in Venezuela and Syria.

In August, the annual Lantern Ceremony was held to commemorate the atomic bombings of Hiroshima and Nagasaki in August 1945. The Lantern Ceremony has been the focus for questioning the continued presence of nuclear weapons and the international movement developing for their elimination. The event is one of the most well attended and usually attracts a bout 100 people to participate in the program which involves making of lanterns and a formal program dedicated to struggle for the elimination of nuclear weapons.

In November the Peace Alliance Winnipeg was instrumental in bringing Elizabeth Penashue to Winnipeg from Labrador to celebrate the release of her book “I Keep the Land Alive.” Elizabeth is an Innu elder, cultural, environmental and peace activist. She first became active in the struggle against the NATO war air exercises over the Innu territory that disrupted their traditional way of life and reliance on the caribou.

In December 2019 the Peace Alliance Winnipeg was part of a national tour of Vanessa Beeley, a British journalist active on the question of exposing the West’s (and Canada’s) dirty war to force regime change in Syria. The tour was organized on the initiative of the Hamilton Coalition to Stop the War. It was made possible by the co-ordination and support of anti-war and peace groups in several Canadian cities. It was important in breaking through the “official” narrative on Syria. This narrative has been used to justify outright aggression by the US, Britain and France and the arming, funding and transporting of proxy armies which draw on racist and extremist forces from many countries. The Winnipeg event was held despite attempts to deplatform the event. Both the University of Winnipeg and the Millenium Library reacted to an orchestrated on-line campaign to discredit Vanessa Beeley. Without any investigation whatsoever or conversation with organizers both institutions pulled their venues.

In the first week of January 2020 the Peace Alliance participated in a large rally against the U.S. assassination of Iranian General and leading political figure Qasem Soleimani. The action threatened to again plunge that region into war. It once again revealed the lawlessness and state terrorism that is practiced by the United States without any international sanction. It underscored how Canada’s military and political ties with the United States implicate it in a policy of war and aggression.

Also, in January, Peace Alliance Winnipeg was involved with a number of organizations in hosting UN Special Rapporteur on Palestine Michael Lynk to give a talk entitled “The Vanishing Horizon: The ABC’s of Human Rights in the Occupation of Palestine.”

In March 2020 Peace Alliance Winnipeg again partnered with a number of organizations to host Suzanne Berliner Weiss in a forum to discuss her book “Holocaust to Resistance, My Journey” documenting her life long commitment to social justice, belief in socialism, opposition to all oppression and freedom for Palestine.

As 2020 progressed Peace Alliance Winnipeg continued in the modified conditions imposed by increasing health restrictions limiting in person activities and actions. These restrictions resulted in cancelling the Walk for Peace as it was impractical to have any sizable gathering for the event. However, Peace Alliance Winnipeg did hold two information pickets at the offices of Liberal MP’s to call for Canada to suspend its purchase of 80 new fighter aircraft.

The Peace Alliance has also been active in growing actions against Canada’s continued extradition hearings against Meng Wanzhou.

In August 2020 Peace Alliance Winnipeg was able to organize the Lantern Ceremony to mark the 75th Anniversary of the bombing of Hiroshima and Nagasaki. The occasion was used to call on Canada to ratify the UN Treaty for the Elimination of Nuclear Weapons – something it refuses to do because of its NATO commitments and alliance with the United States.

It is apparent that the politics we have seen unfold in 2019 and 2020 will continue to link Canada further to a policy of confrontation with the “enemies” as set out by US policy unless those forces are resisted. It is important to oppose the politics of the new Cold War which are dominating the discourse.

Fortunately, 2020 saw significant movement to revitalize the Canadian peace movement by linking a large number of groups and organizations across Canada into a peace network to share information, strategy and joint action. Later this weekend the network will release a call against Canada’s continued support for the Saudi war in Yemen.

Another example of this work has been the national campaign against the purchase of new fighter aircraft. Another is the growing campaign against the anti-China rhetoric being orchestrated in Parliament and the mainstream media in co-ordination with US accusations against China. 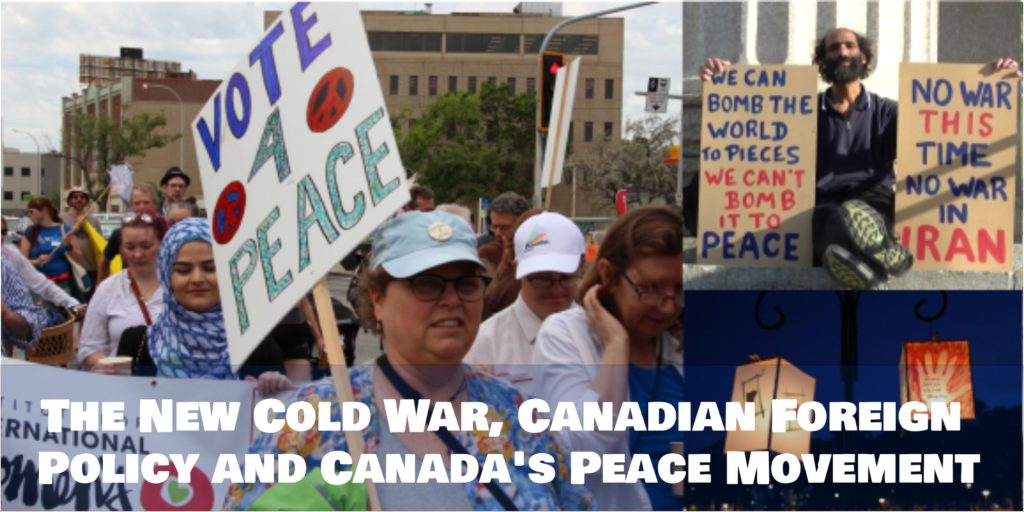 To this end our contribution is next Saturday: The New Cold War, Canadian Foreign Policy and Canada’s Peace Movement. It is a Zoom event and registration is required to participate.