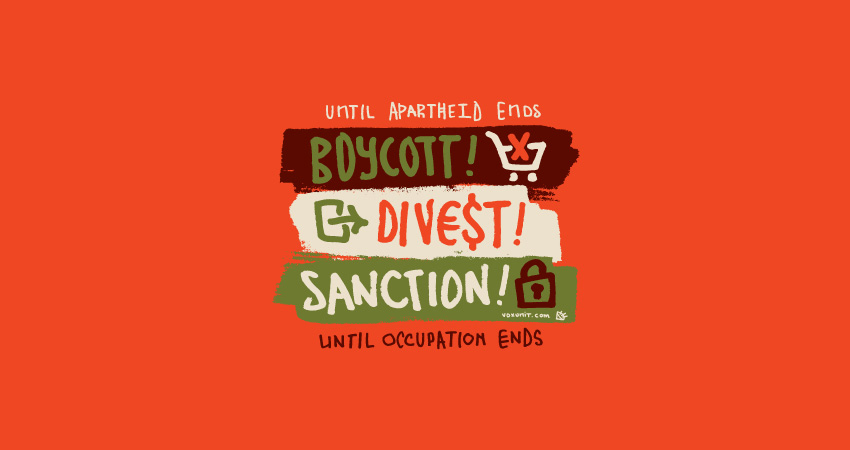 I represent Peace Alliance Winnipeg on the BDS Coalition, a Canadian organization that includes a variety of member groups that support the Boycott, Divestment and Sanctions movement against Israeli Apartheid. BDS is involved in campaigns that are local, national and even international in scope. The goals of BDS are: End the Occupation, Equal Rights for Palestinian Citizens of Israel, the Dismantling of the Apartheid Wall and the Right of Return for all Palestinian Refugees. In this article I have included highlights of recent BDS work.

Nakba 2019
There were actions across Canada on May 18 as part of Nakba71 which was also a National Day of Action for BDS. From Sydney, British Columbia to Fredericton, New Brunswick, peace and solidarity groups took time to remember the 1948 Nakba when over 700,000 Palestinians were ethnically cleansed from their historic homeland. In Winnipeg about 60 people attended a showing of Creation and Catastrophe at Cinematheque in the city’s historic Exchange District. The film screening was sponsored by Canadian Palestinian Association of Manitoba, Canadian Palestine Support Network, Independent Jewish Voices, Mennonite Church Manitoba, Mennonite Central Committee, Peace Alliance Winnipeg, United Church of Canada Region 5 and Winnipeg Coalition Against Israeli Apartheid.

Campaign Against Air BnB
There is a call to request people deactivate their AirBnB accounts because the company lists rentals in illegal settlements in the West Bank. There have been actions at the Canadian head office of the company in Toronto at 101 College St.

Campaign Against Canadian Banks
We all have to keep our money somewhere, and for many of us it ends up being one of Canada’s “big” corporate banks. It should come as no surprise to those involved in social justice movements across Canada that there is current BDS call against Global Investment at RBC, BMO Bank of Montreal, Scotia Bank and Manulife Financial. All these banks are listed on Bank Track as owning shares in two Israeli banks. The BDS Coalition has contacted and met with representatives from RBC and Scotia Bank but received no response from either BMO or Manulife. The BDS Coalition has created templates for letters that people can send to the banks, asking them not to invest in Israeli banks. Visit the BDS coalition website to copy the letters and sign on to the campaign. As a representative of Peace Alliance Winnipeg, a member organization of the coalition, I am involved in this specific campaign.

B.C. Ballet Campaign
The campaign continues and BDS Coalition is looking at proposing an actual boycott as the ballet has performed in the West Bank at the Cana Danse Festival. There was an online petition requesting that they not perform that had over 10,000 signatures.

Campaign Against Remax
Remax operates illegally in the West Bank in Israeli settlements.

Victoria Liquour Store Campaign/Newfoundland Liquor Store Campaign
Campaign to clearly label wine that it is not from Israel, it is from illegal settlements. The BDS campaign in Victoria has actually resulted in labelling wine that is not from Israel as being from its true place of origin, the Occupied Palestinian Territories. In St. John’s the BDS Coalition is following up with the Newfoundland procurement manager of the liquor board there about carrying wine from settlements.

Madonna/Eurovision 2019
This was a recent BDS campaign lobbying Madonna to not perform in Israel as part of the Eurovision 2019 concert. Longtime BDS supporter Roger Waters along with 150,000 people called for a boycott of Eurovision 2019 and asked Madonna not to perform in Israel. While of course Madonna did not cancel her performance, BDS activists from Iceland were present in protest, and as we all heard Madonna appeared on stage at the end of the concert with children holding Palestinian flags.

Dates from Israeli Settlements
There is a great deal of detailed information on the BDS website about food items from illegal settlements that end up on our store shelves. For example, packaged dates are an ongoing problem. The BDS Coalition advises consumers not to purchase dates if there is no country of origin listed on the package. In terms of companies consumers want to specifically watch out for is hadiklaim dates. The company is listed on Who Profits [an organization that tracks companies that do business in illegal Israeli settlements]. According to Who Profits, these dates come from the Occupied Palestinian Territories and the Golan Heights. Hadiklaim packages dates under the following names: Golden Valley, Jordan River, King Solomon, Bomuja Blue and La Palma. There is no country of origin listed on any of the packages. The BDS Coalition has written to the Canadian Food Inspection Agency [CFIA] and asked them to look into these concerns.

Go, Raptors! No, Occupation!
Puma is the only international sponsor of the Israel Football Association [IFA] which includes teams in illegal settlements on Occupied Palestinian Territories. Palestinian football teams and athletes are calling for a boycott of Puma. Raptors’ player Danny Green is also a Puma sponsor. People are encouraged to Tweet a message to him in support of BDS. For more information on the campaign against Puma see the Canadian BDS Coalition website.

More Information
For more information on these and many other active BDS campaigns, visit the global BDS Network website, Canadian BDS Coalition or the BDS Coalition Facebook page to learn more about BDS Academic, Cultural and Economic Boycotts and to sign any active petitions.

← Trudeau & Trump: #HandsOffVenezuela
Canada must act for peace, not war →