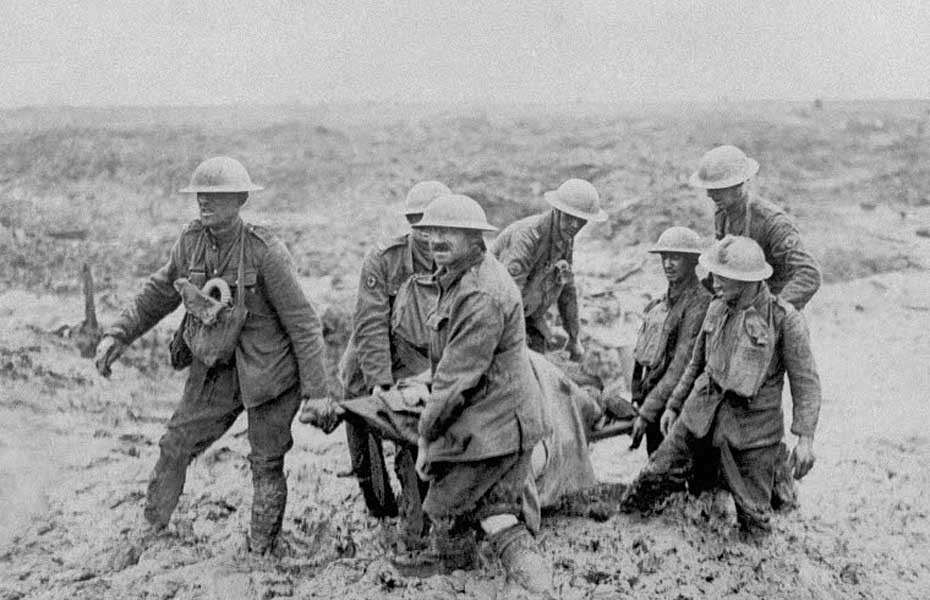 In this 1917 file photo, First World War Canadian soldiers carry a stretcher through the mud near Boesinghe, Belgium. PHOTO: The Associated Press

November 11th marks the 100th Anniversary of the end of World War 1. The leaders of the western countries that fought the war have made their pilgrimage to the battlefield monuments to lay wreaths and say words of remembrance. However, what is missing in their words is any context to the cause of that war or the implications for today.

The First World War was not war to secure freedom against tyranny as it is sometimes described. World War 1 was the first war of the modern era to reflect the struggle for power and domination of markets, resources and colonies by the major powers of the time. It was the end of certain empires and the consolidation of others. The Ottoman Empire collapsed in Central Asia and the Middle East giving rise to re-division of those regions and the creation of new countries out of its destruction. The same phenomenon occurred in Africa as Germany saw its colonies divided among the victorious European powers. Even for the European victors – France and Britain – the huge financial costs meant they were diminished powers on the world stage soon to be unable to afford their colonies. The United States emerged as the most powerful nation in the aftermath of World War 1. 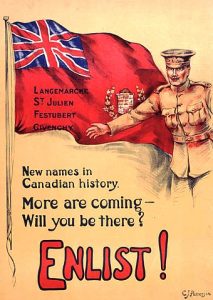 For Canada, the war is portrayed as a “coming of age” – which is true from the perspective of Canada’s role internationally and its support for a particular world order. Until the First World War Canada’s wars involved the suppression of First Nations and Metis resistance to colonial expansion and, internationally, its support of the British in the Boer War. The First World War marked the development of Canada as a significant military and political player in a new western alliance centred around Britain and the United States. Immediately, after the First World War Canada joined its “western” allies in sending an army to invade Russia in an attempt to crush the fledgling workers and peasants state that ended Russian participation in World War 1. While that adventure failed Canada has never looked back.

In the aftermath of World War 2 Canada was one of the driving forces behind the establishment of NATO which ushered in the Cold War, sparked an arms race and ended the hope for common security and peace in Europe. In line with this Canada participated in the Korean War to secure a foothold for western interests on the Korean peninsula. It steadfastly supported the US. in the Cold War. Canada and the US became linked in joint North American defence and nuclear security against Russia and China – a policy Canada continues to the present day. Canada, while not engaged directly in the US war in Vietnam, lent important strategic support.

In the more recent period, Canada has participated in major actions in Yugoslavia, Haiti, Iraq, Libya and Syria. Those actions were aimed at regime change to secure western imperialist interests in those countries. Its two most significant military efforts have been in Afghanistan and now Ukraine. Of course, none of these military actions have been defined for what they truly are – the securing of western imperialist interests. Instead, the public is sold on the wars by describing them as necessary for the creation or protection of societies based human rights and democratic values – the so-called “western values”. However, as we see with respect to Canada’s (and the West’s) strategic ally, Saudi Arabia, this is nothing but a sham. 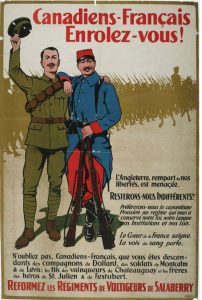 We are confronted by a most dangerous world situation. At official levels, the “enemies” in the new conflict are being defined – in the main Russia and China. As the World War 1commemorations were taking place NATO launched its largest military exercise since the end of the Cold War. The NATO war games come not long after a much larger Russian military exercise. In Poland, which won independence on November 11, 1918, the day was commemorated with massive demonstrations of right wing nationalists who were joined by extremists from Britain, France and Italy.

The way out of the situation is for Canada to extract itself from the policy it has pursued for 100 years. There are many steps it can take. One would be to sign and ratify the UN Treaty on the Prohibition of Nuclear Weapons, a move it is has so far resisted because of its NATO ties and NATO’s commitment to use nuclear weapons. Canada can also remove itself from the NATO alliance which, at the present time, is a real and present danger to Canadian sovereignty and the main instrument by which Canada will become embroiled in conflict (as happened with the NATO wars in Libya, Afghanistan and Ukraine). These two steps would create conditions for Canada to assume a position of active neutrality in the world through which it can be a force for creating stability and security. This would represent a true coming of age for Canada.

← Left, Right — Marching to the Beat of Imperial Canada
The White Poppy is almost as old as the more familiar red one →

2 comments for “Make Canada a force for peace”