By Matsui Kazumi
Mayor, The City of Hiroshima 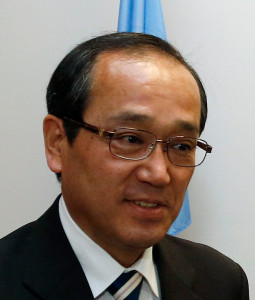 AUG. 6, 2017 – Friends, seventy-two years ago today, on August 6, at 8:15 a.m., absolute evil was unleashed in the sky over Hiroshima. Let’s imagine for a moment what happened under that roiling mushroom cloud. Pika—the penetrating flash, extreme radiation and heat. Don—the earth-shattering roar and blast. As the blackness lifts, the scenes emerging into view reveal countless scattered corpses charred beyond recognition even as man or woman. Stepping between the corpses, badly burned, nearly naked figures with blackened faces, singed hair, and tattered, dangling skin wander through spreading flames, looking for water. The rivers in front of you are filled with bodies; the riverbanks so crowded with burnt, half-naked victims you have no place to step. This is truly hell. Under that mushroom cloud, the absolutely evil atomic bomb brought gruesome death to vast numbers of innocent civilians and left those it didn’t kill with deep physical and emotional scars, including the aftereffects of radiation and endless health fears. Giving rise to social discrimination and prejudice, it devastated even the lives of those who managed to survive.

This hell is not a thing of the past. As long as nuclear weapons exist and policymakers threaten their use, their horror could leap into our present at any moment. You could find yourself suffering their cruelty. This is why I ask everyone to listen to the voices of the hibakusha. A man who was 15 at the time says, “When I recall the friends and acquaintances I saw dying in those scenes of hell, I can barely endure the pain.” Then, appealing to us all, he asks, “To know the blessing of being alive, to treat everyone with compassion, love, and respect—are these not steps to world peace?”

Another hibakusha who was 17 says, “I ask the leaders of the nuclear-armed states to prevent the destruction of this planet by abandoning nuclear deterrence and abolishing immediately all atomic and hydrogen bombs. Then they must work wholeheartedly to preserve our irreplaceable Earth for future generations.”

Friends, this appeal to conscience and this demand that policymakers respond conscientiously are deeply rooted in the hibakusha experience. Let’s all make their appeal and demand our own, spread them throughout the world, and pass them on to the next generation.

Policymakers, I ask you especially to respect your differences and make good-faith efforts to overcome them. To this end, it is vital that you deepen your awareness of the inhumanity of nuclear weapons, consider the perspectives of other countries, and recognize your duty to build a world where all thrive together.

Civil society fully understands that nuclear weapons are useless for national security. The dangers involved in controlling nuclear materials are widely understood. Today, a single bomb can wield thousands of times the destructive power of the bombs dropped 72 years ago. Any use of such weapons would plunge the entire world into hell, the user as well as the enemy. Humankind must never commit such an act. Thus, we can accurately say that possessing nuclear weapons means nothing more than spending enormous sums of money to endanger all humanity.

Peace Memorial Park is now drawing over 1.7 million visitors a year from around the world, but I want even more visitors to see the realities of the bombing and listen to survivor testimony. I want them to understand what happened under the mushroom cloud, take to heart the survivors’ desire to eliminate nuclear weapons and broaden the circle of empathy to the entire world. In particular, I want more youthful visitors expanding the circle of friendship as ambassadors for nuclear abolition. I assure you that Hiroshima will continue to bring people together for these purposes and inspire them to take action.

Mayors for Peace, led by Hiroshima, now comprises over 7,400 city members around the world. We work within civil society to create an environment that helps policymakers move beyond national borders to act in good faith and conscience for the abolition of nuclear weapons. In July, when 122 United Nations members, not including the nuclear-weapon and nuclear-umbrella states, adopted the Treaty on the Prohibition of Nuclear Weapons, they demonstrated their unequivocal determination to achieve abolition. Given this development, the governments of all countries must now strive to advance further toward a nuclear-weapon-free world.

The Japanese Constitution states, “We, the Japanese people, pledge our national honor to accomplish these high ideals and purposes with all our resources.” Therefore, I call especially on the Japanese government to manifest the pacifism in our constitution by doing everything in its power to bridge the gap between the nuclear-weapon and non-nuclear-weapon states, thereby facilitating the ratification of the Treaty on the Prohibition of Nuclear Weapons. I further demand more compassionate government assistance to the hibakusha, whose average age is now over 81, and to the many others also suffering mentally and physically from the effects of radiation, along with expansion of the “black rain areas.”

We offer heartfelt prayers for the repose of the atomic bomb victims and pledge to work with the people of the world to do all in our power to bring lasting peace and free ourselves from the absolute evil that is nuclear weapons.