Location: The Hive, University of Winnipeg

Admission: Free. We will pass the hat for donations to help offset Yves’ travel costs. 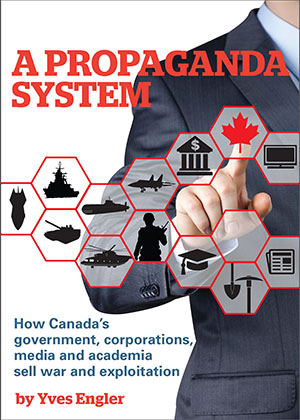 Please join us for the Winnipeg part of Yves Engler’s cross Canada book tour to introduce “A Propaganda System: How Canada’s Government, Corporations, Media and Academia Sell War and Exploitation.” The book traces the long history of government information control during war, including formal censorship, as well as extreme media bias on topics ranging from Haiti to Palestine, investment agreements to the mining industry. The book also details the corporate elite’s funding for university programs and think tanks.

Written for Canadians interested in the structures impeding understanding of this country’s role in the world, the book should be of interest to journalists curious about the institutions seeking to “spin” them, development workers dependent on government funds and academics interested in the foreign-policy establishment’s influence on campus.

About the Author
Dubbed “Canada’s version of Noam Chomsky” (Georgia Straight), “one of the most important voices on the Canadian Left today” (Briarpatch), “in the mould of I. F. Stone” (Globe and Mail), “part of that rare but growing group of social critics unafraid to confront Canada’s self-satisfied myths” (Quill & Quire) , “ever-insightful” (Rabble), “Chomsky-styled iconoclast” (Counterpunch) and a “Leftist gadfly” (Ottawa Citizen), Yves Engler is the author of nine books and hundreds of articles.