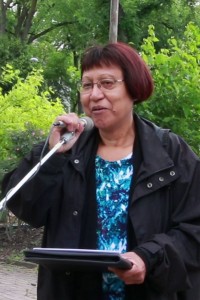 Good afternoon! And welcome to everyone here and thank you all for showing support in this year’s Walk for Peace. It is truly an honor to be asked to give a few opening statements as a First Nations Educator and from an Indigenous perspective. I would like to thank the organizers of this event, the Peace Alliance of Winnipeg and the Winnipeg Chapter Council of Canadians, for offering me an opportunity to do so.

The 2016 Walk for Peace is raising the issue of “Freedom for Palestine” and states that ‘there can be no peace without justice’ on the discussion of what is (and has been) happening between the State of Israel and the people of Palestine since the end of the 2nd World War. It also states that the basis of this 70 year conflict has been and continues to be one which concerns not only the ‘question of land, but of nationhood, democratic rights and justice’.

In reading the open letter of support that was distributed by the organizing groups of this event, it was truly remarkable to read about the similarities of both the historical and present-day developments between the People of Palestine and our country’s Indigenous peoples.

In fact, one would be hard-pressed to deny the fact that the historical premise of the lot of Indigenous peoples across Canada today is one directly resultant of not only the Canadian state’s representatives – both in the past and present-day – of their outright refusal to address not only Indigenous peoples ‘land question, but equally important, the denial by the Canadian state of the right of nations to self-determination, the denial of their basic human and democratic rights as well as justice on all fronts’.

To highlight in brief just a couple of these historical and present-day similarities existing between Canada’s Indigenous populations and the Indigenous people of Palestine, let’s take as an example, the land question….

In Manitoba alone, there are numerous accounts (both in the past and today) of ‘relocations’ of whole groups of Indigenous peoples, either under threats of violence – such as what occurred in the 1930’s at Clear Lake, Manitoba – just to make way for the creation of a National Park –wherein members of that Anishinabe/Ojibway Nation were forcibly removed, at gun-point, to a less desirable location while their homes were literally being burnt to the ground!

Or in the instances that occurred under the guise of the protection of ‘private property’ (which rules supreme in our society) we have the more recent example in 2011 of the removal of the people of the Lake St. Martin Ojibway Band (members of whom are, literally, walking the streets of Winnipeg today, simply because they are homeless); then there are the Sayisi Dene people in northern Manitoba (as in the people of Lac Brochet and Tadoule Lake) whom were also forced to relocate during the mid-1950’s, all because of the federal government’s concern over the so-called depopulation of the Caribou herds by the Dene people…Caribou as we all know, was the main food source for thousands of years for the Dene people (and it still is to this day);

And there are the Cree people throughout parts of Manitoba, such as the Chemawawin or Easterville Band who also had to be relocated during the early 1960s due to the building of the hydro-electric dam at Grand Rapids by Manitoba Hydro.

For these whole populations, on the question of lands, what we are talking about here is that they had to be removed from their traditional hunting and gathering territories that they’ve known, literally for thousands of years prior to the introduction of private property and the making of maximum profits or to make way for the so-called ‘progress’ of societal demands.

The list goes on about these so-called ‘grievous errors’ by the federal governments, but what really were in fact forcible removals of entire Indigenous populations right across Canada, as if they had no right to be there in the first place, and all of this was done to them after they were condemned to a life of poverty on the reservation system (a system which is akin to the South African system of apartheid one might argue) as well as alienation from the rest of Canadian society, that was formally introduced by the Canadian government in the 1870s.

There are 51 Indigenous languages spoken in Canada, today, a number which is fast receding at an alarming rate as time progresses according to Stats Canada (this was documented over two decades ago, which means that there are probably a much lesser number of Native languages currently in use at this time ).

It is ironic, in a sense, that one of these languages facing extinction, meaning that it has less than 100 fluent speakers, is one which had, as its birthplace here, then known as the ‘Red River Settlement’, and that is the language of the Métis People which came into being well over two centuries prior to Canada’s Confederation – the Metchif language!

This, again, is just to highlight another example of an injustice committed against Indigenous peoples of Canada historically by both the Canadian state and various Churches – that being the cultural genocide of a people’s way of life, their languages, and social well-being – through the residential schools system which had been put into effect both before and after Confederation. The effects of which, one might add, are still prevalent today, especially amongst the youth of Indigenous origins – with regards to their Identity and social well-being!

As we participate in today’s events of the 2016 Walk for Peace, let’s please remember that Indigenous peoples also share sentiments of outrage alongside many Canadian people over what is currently happening in Israel and to the Palestinian people in particular.

Despite the misinformation or the spreading of non-truths, which have no factual basis whatsoever, about the issues underlying the lot of Indigenous peoples throughout Canada today, as it is currently being done also about the plight of the people of Palestine.

Let there be no mistake about one thing: the struggles of poverty-stricken and oppressed peoples in nation-states, such as Indigenous peoples within Canada, or the Indigenous people of Palestine, is (and always has been) a struggle of one against violence, displacement and racism! To put it simply, the struggle for the right of a people to exist as they see fit! Without this guarantee, there simply can be no peace without justice!

This article is the text of a speech by Mary Elizabeth Stanley at the 35th annual Winnipeg Walk for Peace on Sunday, June 11, 2016. You can watch her speech and those of the other speakers in this video.

← Walk for Peace: Freedom for Palestine
All about the Palestinian keffiyeh →