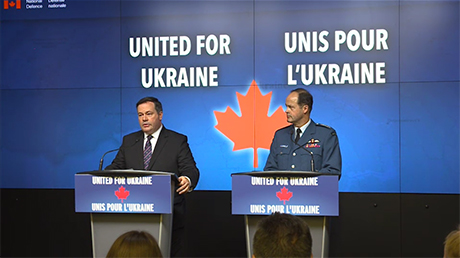 The decision of the Canadian government to send 200 troops to train the Ukrainian army will only intensify the divisions that have erupted in Ukraine since the installation of the Poroshenko government.

Harper is pursuing his “new” cold war ideology and confrontation with Russia at the expense of the Ukrainian people. To its shame Canada has supported and encouraged the Kyiv government’s war against the eastern regions.
The resistance of the east Ukraine is to the policies of the Kyiv government. Poroshenko has pursued the integration of Ukraine economically and politically with the EU, militarily with NATO; and the elimination of the rights of national and ethnic minorities in a grand scheme to “homogenize” Ukraine.

As the restructuring demanded by the EU hits home with austerity, erosion of social services, deprivation of livelihood and destruction of agriculture the discontent in all of Ukraine grows. The war, in particular, has spawned an anti-war movement.

Contrary to the “blame Russia” narrative, it was the regular forces of the Kyiv government and the irregular militia of right wing groups which entered the eastern regions with violence a year ago. The full horror of that violence came to the attention of the world when 40 people were burned alive in the trade union headquarters in Odessa. To date the conflict has resulted in the death of more than 6000 civilians and the displacement of more than 1.5 million people.

The actions of the Canadian government are contrary to securing peace in Ukraine or democratic values. Canada is turning a blind eye to the dark history of right-wing Ukraine nationalism in its support for the Kyiv government. On April 9 the Ukraine Parliament extended official recognition to a nationalist militia that collaborated with the Germans during the Second World War.

A dialogue is emerging in Ukraine (and the diaspora) against the war and in favour of reconciliation and peace. Harper and Poroshenko, however, seem bent on stopping this by aligning themselves with the darkest forces from the past and fanning the flames of conflict within Ukraine and, more broadly, Russia.

Glenn Michalchuk is chair of Peace Alliance Winnipeg. A version of this article was published in the Letters Section of the Winnipeg Fee Press on April 17, 2015.

← Kiev’s Bloody War Is Backfiring
DENNIS EDNEY (LAWYER FOR OMAR KHADR): “THE RULE OF LAW & THE POLITICS OF FEAR” →