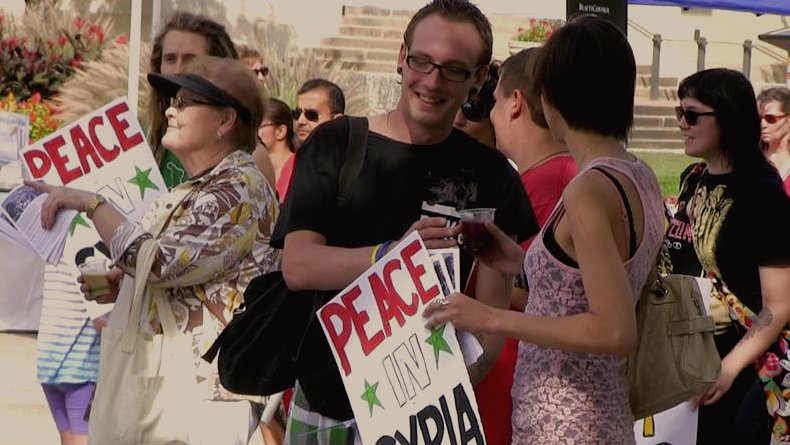 Sept. 7, 2013: For the second time in a week, Winnipeggers rallied in solidarity with the people of Syria and in opposition to a US led attack. After a brief gathering on the steps of the Manitoba Legislature, the demonstrators took to the streets to hand out literature and talk with their fellow Winnipeggers. Photo: Paul S. Graham

In 2013 Peace Alliance Winnipeg further developed its capacity as an organization dealing with the issue of peace.

Peace, however, is not something in the abstract; rather it is very closely linked to what is happening around us. Thus, throughout 2013 the activities of the Peace Alliance Winnipeg were connected to issues both ongoing and emerging. In terms of emerging issues at the time of last year’s AGM we became involved with the Idle No More movement. As part of that AGM we hosted a very successful forum with activists of the Idle No More movement. It was an important action for the Peace Alliance because Idle No More speaks to the question of what kind of Canada we currently have. This has been a consistent part of our work. What role Canada plays in the world is shaped by what democratic values exist within Canada. Thus, it is an important part of our work to support and work with broad social movements, such as Idle No More, to address what is wrong within Canada.

Idle No More has focused the discussion on many issues. Two of these in particular stand out – democracy and human rights are fundamental to the peace movement and Idle No More has raised both these issues. It is impossible to conceive of influencing Canada’s role in the world or what kind of Canada we have internally without dealing with the issues of democracy and human rights. To develop our involvement in that work Peace Alliance Winnipeg – in conjunction with the Green Party of Canada – organized the Speak Up for Democracy Town Hall in October. The event was attended by almost 300 people. Importantly, it examined the question of democracy from various perspectives:

The other key issue – that of Human Rights – is part of the program for this year. In this context we are proposing a forum, on Human Rights in the 21st Century – what this means and how it is defined. As of now the plan is to hold this in March. The term “human rights” is much used but often poorly understood. While it is often used to expose various type of harm done to people around the world it can also be used as a pretext for the greatest human rights violation of all – war. Given that Winnipeg is the site of the Canadian Museum for Human Rights it is an important discussion to have especially considering that the Museum has considerable resources to influence that discussion and direct it in ways that may not necessarily reflect the question of human rights

Besides undertaking the new work I just described the Peace Alliance has a broad range of activities and on-going work.

For example, we are part of the Winnipeg Coalition Against Israeli Apartheid and through that organization are involved in the on-going campaign on Boycott, Divestment and Sanctions and the building of that movement.

Another key event we have each year is the August 6th Commemoration of the dropping of atomic bombs on Hiroshima and Nagasaki. This also continues to develop in the scope of its work. The Mayor’s for Peace Campaign grew out of the Hiroshima and Nagasaki commemorations. Winnipeg is a signatory to that Campaign and, as part of the August 6th commemorations here, we plan to elevate that awareness and expand our discussions with the City on its activity in that campaign.

In the summer of 2013 Peace Alliance Winnipeg was selected to be part of the Winnipeg Arts Council With Art Program. The program links artists with community groups. Our aim in applying for this was to work with an artist to give expression to the very deep significance that the peace movement has to the both to the history and current situation of Winnipeg.

Lastly, as the year 2013 drew to a close the work of supporting war resisters re-emerged as part of the Peace Alliance program. American war resister Joshua Key is now in Winnipeg and needs various support from the community. We have begun to discuss ways that we can enable that support and to assist Joshua to remain in Canada and to attend to the needs he has.

This is a brief overview of our work. It is important work that we do each year and it requires the support of our members. It is work that has made a difference in many respects to Winnipeg. I want to go back to something we did around the pressure that Canada, along with other countries, should be involved in the conflict in Syria. We were very successful in mobilizing significant opinion in the city about that question and, in particular, on the question of Responsibility to Protect which plays into the question of human rights and, in fact, one of the authors of that doctrine is Lloyd Axworthy.

In conclusion, this is very significant work that we do. We often do it on the basis of relatively small number of participants but nonetheless the actions have been very important for developing this movement in Winnipeg.