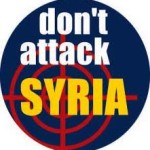 Lloyd Axworthy, current president of the University of Winnipeg and formerly Minister of Foreign Affairs in the Chretien government, is a vocal supporter of military intervention against Syria. He cites the 1999 bombing of Serbia by NATO as a precedent that supports his call to war, even though the bombing of Serbia was a clear violation of the UN Charter and a serious breech of international law.

Mr. Axworthy will be speaking tomorrow at a Red Cross sponsored event called “Perspectives on International Humanitarian Law.” We anticipate that he will continue to urge a military solution to the Syrian crisis and lend his support to those who believe Canada should become increasingly warlike in international relations. Using the so-called “Responsibility to Protect” as a pretext for armed intervention in Syria will only escalate this crisis into a regional war and could lead to even more dangerous conflicts.

Please join us in an information picket.

← Video: Winnipeg Peace in Syria Rally
Even if Syria Complies on Chemical Arms, Six Others Still at Large →