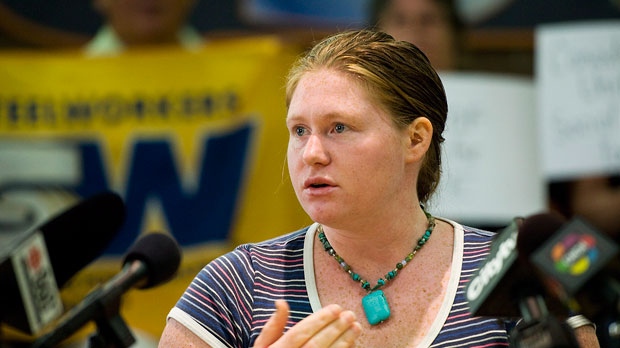 Amnesty International identifies her as a prisoner of conscience, she was the first American female conscientious objector to flee to Canada, but mainstream media mostly ignore this Iraq war vet with PTSD – unless they’re labeling her a “deserter.”

A Texan married to a Texan, Private First Class Kimberly Rivera, 30, is a poor, pregnant mother of four who was sentenced to 10 months in jail on April 29 by the United States Army.

Her crime, after serving a tour of duty in Iraq in 2006, was seeking help from her military chaplain about her growing conscientious objection to the American war in Iraq, getting dishonest advice from her superiors, and thinking as a result that she had no realistic options other than returning to Iraq or emigrating to Canada. She and her husband and two children went to Canada in 2007.

Her story illustrates some of the chronic injustices of American life, not least the extra vengeance the society likes to visit on those who resist, and who make that resistance public.

By 2005, Kimberly and Mario Rivera had two children and financial pressure, even though they both had jobs at the local Walmart, where they’d met. Kimberly, then 22, had her first child when she was 19 and the second two years later. They were living in Mesquite, Texas, a city of about 140,000 within the greater Dallas-Forth Worth metro area.

Surveying their limited prospects, Kimberly and Mario decided that one of them should join the military. Both of them needed to lose weight to qualify. Kimberly lost weight faster and enlisted in January 2006. Her incentives included an $8,000 signing bonus and family health insurance.

The enlistment process led Kimberly to expect to spend her time loading and unloading equipment at Fort Carson, Colorado, where she was a wheeled-vehicle driver in the 4th Infantry Brigade Combat Team. But in the fall of 2006, her unit was ordered to Iraq, where she was a “gate guard,” as she put it in an interview with Courage to Resist in 2007: