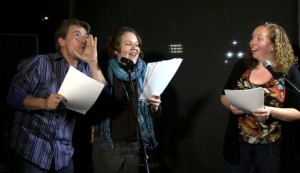 With skillfully performed covers of songs by Pink Floyd, John Lennon and the Weavers, Tom Penner and Jill Cooper closed out the evening with ballads beloved by peace activists everywhere.

International Peace Day was established by the United Nations in 1981 and first celebrated in September 1982. Since then it has been observed in countries around the world.

Project Peacemakers is a church-based organization that has been active in Winnipeg since 1983. It conducts educational forums, and publishes  educational materials on such issues as child soldiers, war-affected children, and violent video games and toys.