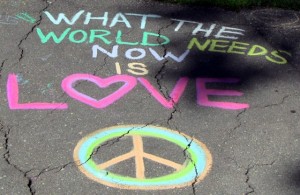 The underlying premise of CHALK 4 Peace might best be summed up in a statement attributed to Mahatma Gandhi in 1937: “There is no way to peace; peace is the way.”

CHALK 4 Peace is an annual event that has spread to hundreds of communities world-wide since its inception in 2003 in Arlington, Virginia. The objectives, according to CHALK 4 Peace are:

Kisa MacIsaac, one of the organizers of the Winnipeg event, explains how this coming together of arts, music and people contributes to a more peaceful world.

You can find find CHALK 4 Peace Winnipeg on Facebook.