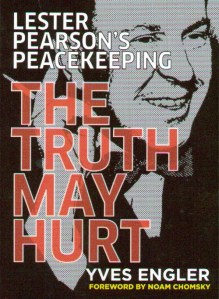 Lester B. Pearson has been dead for four decades, but his imagined legacy, that of international peacekeeper, remains one of the defining myths of the Canadian identity. Horrified by our murderous behavior in the occupation of Afghanistan and the bombings of Libya and the former Yugoslavia, the sainted memory of our 14th prime minister is resurrected by people who ought to know better to argue that war-making is not really a Canadian value, that we need to retake our traditional place in the global community as a progressive force for international co-operation, harmony and peace – that we must, again, assume the mantle of our revered Nobel Peace Prize laureate, Mike Pearson.

Yves Engler‘s sixth book, Lester Pearson’s Peacekeeping: The Truth May Hurt, was written to put an end to this nonsense. Canadian foreign policy continues to serve the interests of Canada’s corporate elite, and Pearson’s major contribution to this end was to shift Canadian allegiance from the declining British Empire to the emerging American one. With his peacekeeping fig leaf firmly in place, he backed some of the most murderous thugs of the 20th Century. As Noam Chomsky puts it in the preface to Engler’s book:

“Canada’s Nobel Peace Prize winner and eminent statesman, Lester Pearson was a major criminal, really extreme. He didn’t have the power to be like an American president, but if he had it, he would have been the same. He really tried.”

To encapsulate the book, Yves assembled a list of the “Top 10 things you don’t know about Canada’s most famous statesman, Lester B. Pearson.”

10. Asked in Parliament, he refused to call for Nelson Mandela’s release from prison.
9. He had Canada deliver weapons to the French to put down the Algerian and Vietnamese independence movements.
8. The Kennedy administration helped Pearson win his first minority government.
7. He incited individuals to destroy a peace group after it called for the outlawing of nuclear weapons.
6. Pearson backed the CIA coups in Iran and Guatemala.
5. He described the formation of NATO, not peacekeeping, as the “most important thing I participated in.”
4. Pearson threatened to quit as external affairs minister if Canada failed to deploy ground troops to Korea.
3. He agreed to have Canada’s representatives to the International Control Commission for Vietnam spy for the US and deliver their bombing threats to the North.
2. The world’s leading intellectual, Noam Chomsky, considers Lester Pearson a war criminal.
1. Stephen Harper’s foreign policy resembles that of Pearson more than any Liberal would ever admit.

Yves Engler was in Winnipeg on March 15, speaking at the Mondragon Bookstore and Coffee House. His appearance was sponsored by Peace Alliance Winnipeg. Dwayne Crowe and I prepared this video report for Winnipeg Community Television.

2 comments for “Lester Pearson’s Peacekeeping – The Truth May Hurt”