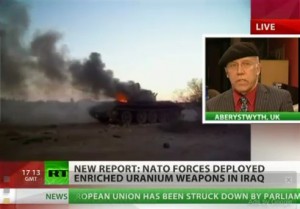 RT, Oct. 25, 2011 – The high court in London is to hear a case over the use of uranium-enhanced weapons by U.S.-led forces during the infamous Iraqi Battle of Fallujah in 2005. This, following a number of reports alleging their use was much more widespread than originally thought. RT talks to Christopher Busby, the co-author of two such reports and a visiting professor at the school of Biomedical Studies, the University of Ulster.