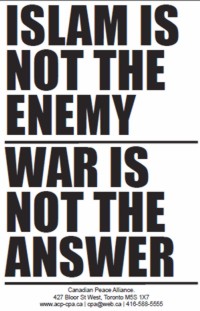 With the 10th year anniversary of September 11 only days away, Stephen Harper is using the occasion to whip up more hatred against Muslims.

While Harper claims that so-called “Islamicism” is the biggest security threat facing Canada, it is in fact his government’s policies that are the bigger threat. Harper’s support of war and occupation, his reckless support of Big Oil which is causing climate change and his austerity agenda are all creating greater inequality and insecurity both abroad and at home.

The Harper government and its supporters have often sought to denigrate Islam, painting all Muslims with the brush of criminality or terrorism in an attempt to divide Canadians and to justify the government’s wars of aggression. This is nothing new. For centuries, nations have tried to characterize certain groups as less than human to provide an excuse for slavery and murder.

Canada’s war in Afghanistan was justified as a crusade to kill “detestable murderers and scumbags” in the words of former Canadian Chief of Defence staff, Rick Hillier. Harper’s plan to use the Canadian forces to overthrow regimes around the world needs a convenient enemy so he is scapegoating Muslims.

Harper also wants to resurrect draconian security laws that will suspend charter rights for Canadians. These laws create a legal system that allows people to be thrown in jail without charge or warrant, based on suspicion rather than fact. This is a threat to the freedom of all Canadians and must be stopped.

Ten years ago, on September 26, 2001 thousands marched in Toronto against the impending war on Afghanistan. To challenge the climate of fear and racism, we carried placards that read “Islam is Not the Enemy – War is Not the Answer”. Ten years later we need to revive that slogan.

Download the window sign and print extra copies for friends, family and co-workers. We need to paint this country with symbols of peace and unity.

Tell Harper his bigotry is not welcome here.