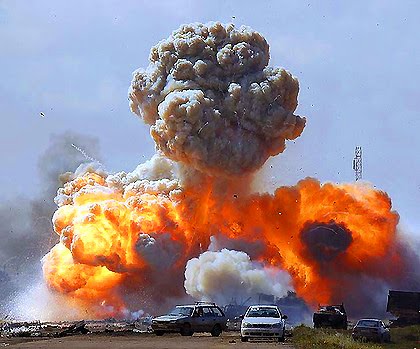 We are now in the 84th day of the bombing campaign that the United Nations Security Council authorized to enforce a no-fly zone over Libya in a bid to protect civilians from Moammar Gadhafi’s forces. In a bizarre development, the North Atlantic Treaty Organization has said it will extend the campaign for 90 days, surely a first in the history of war when one side “extends the contract” for a set period. This presumably occurred because NATO’s strategy is still based on the flimsy hope that Colonel Gadhafi will see the error of his ways and capitulate before his surroundings and his supporters are bombed back to the Stone Age.

ATO’s obsession with its strategy of hope was tried once before in 1999, with the bombing of Serbia and the breakaway province of Kosovo. A myth that the 78-day bombing campaign persuaded Serbian leader Slobodan Milosevic to withdraw his forces from Kosovo continues to grow despite overwhelming facts to the contrary.

Before that war – and contributing to its start – the international community gathered in Rambouillet, France, and, on March 18, 1999, produced an accord that spelled out a peace plan to deal with the armed insurrection by the Kosovo Liberation Army (designated at the time by the CIA as a terrorist organization).

Unfortunately – but intentionally – the accord contained two poison pills that Mr. Milosevic could never accept, making war or at least the allied bombing of a sovereign state inevitable. The first pill demanded that NATO have freedom of movement throughout the entire land, sea and airspace of the former Federal Republic of Yugoslavia. In other words, NATO would have the right to park its tanks around Mr. Milosevic’s downtown office in Belgrade. The other pill required that a referendum be held within three years to determine the will of those citizens living in Kosovo regarding independence. The fact that Kosovo’s population was overwhelmingly Albanian Muslim guaranteed that the outcome of any such referendum would be a vote for independence and the loss of the Serbian nation’s historic heart.

Mr. Milosevic refused to sign the accord, and NATO began bombing Serbia on March 24, 1999, without a Security Council resolution, citing a “humanitarian emergency” – a decision still widely challenged by many international legal scholars. NATO said it would take only a few days of bombing to persuade Mr. Milosevic to withdraw his forces from Kosovo.