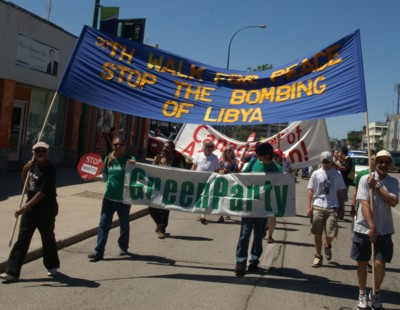 Statement of Peace Alliance Winnipeg to the 30th Annual Walk for Peace, June 18, 2011

On Tuesday, June 14 the Conservative Government of Stephen Harper, with almost unanimous support of all political parties, extended Canada’s role in the bombing of Libya. Principled opposition to war was not the order of the day. In exchange for support, the Harper government promised to increase humanitarian aid as it also stepped up the bombing of Libya.

The only opposition to this plan came from Elizabeth May who sits as the sole representative of the Green Party.

In taking this decision the Government — supported by the NDP, the Liberals and the Bloc Quebecois — was also able to expand the definition of the action to include regime change in Libya. According to Foreign Affairs Minister John Baird and Defence Minister Peter MacKay, the goals of the Libyan mission cannot be achieved until the regime of Moammar Gadhafi is overthrown. This is notwithstanding the fact that the opposition forces that the Canadian government is now recognizing as the representative of the Libyan people contain elements once loyal to and supportive of the Gadhafi government.

The actions of Canada and other members of the NATO alliance continue to reach far beyond the initial call of the UN Security Council which prescribed four actions to be undertaken by the international community:

Furthermore, the UN Security Council resolution framed the above measures with the following specific demands: “the immediate establishment of a cease-fire and a complete end to violence and all attacks against, and abuses of, civilians;” and “ the need to intensify efforts to find a solution to the crisis which responds to the legitimate demands of the Libyan people…with the aim of facilitating dialogue to lead to the political reforms necessary to find a peaceful and sustainable solution.”

One can certainly ask how the current NATO action (which has co-opted the fig-leaf of support offered by the Arab League) reflects the interests of the UN resolution. The fact that Canada and the NATO alliance are now pursuing a course of regime change parallels both the wars waged in Iraq and Afghanistan – and, before that, Yugoslavia. The fact that proposals for ceasefires advanced by the African Union and the Libyan government have been dismissed by increased NATO action shows that the attack on Libya is not about enforcing the demands of the UN Security Council.

The NATO intervention in Libya has nothing to do with supporting the legitimate struggle of the Libyan people for freedom and democracy. The initial “legitimacy” for this action was taken under the cover of the Arab League’s request for a no-fly zone to allow the nations of the region to find a resolution to what is really a civil war between tribes loyal to various political forces. That fraud has now been dropped as Canada and other western powers through their military alliance of NATO enforce their real intent. The attack on Libya has but one goal in mind – control of the Arab uprisings by western nations intent on the plunder of the resources of the region.

Canadians have every right to be concerned about the dangerous course and precedent being set for Canada. It is some twenty years since the Cold War ended. In that time people hoped that international relations would be governed by international norms, democratic principles and the right of peoples and nations to self-determination. Time and again that has not been the case. Canada, far from being a force for such principles, has carved a role for itself as one of the first to justify aggression to protect its interests and that of its allies.

The decision by the all but one member of parliament to vote for war should signal the need for all to become active to oppose this dangerous course. We must not only “Stop Harper” but all who engage in the destructiveness of war to exert political control and domination over peoples and nations and seek to justify this under the principles of humanitarianism and democracy.