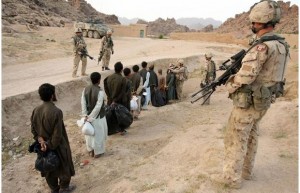 Despite what John Baird and Peter MacKay said, the release of 4,000 heavily censored files is not the end of the Afghan detainee scandal. The files are but a fraction of the total number of documents (estimated at between 25,000 and 40,000 pages) on the issue and these are so heavily redacted that they fail to shed any light on the central issues in the affair. This is just another smokescreen by the Harper Government.

It follows a pattern that we have seen from this government before. In December 2009, the government prorogued parliament in an attempt to delay the calls for the release of all the files. They have spent the last few years using all legal mechanisms at their disposal to keep the documents hidden and they have attacked the testimony of Canadian officials such as Richard Colvin about the torture of detainees. This suggests a less than stellar commitment to transparency on the issue.

There is very little new information in this latest release of documents. What is new, however, suggests that further investigation is warranted. According to the Toronto Star, one of the documents shows that in 2007, then Defence Minster Gordon O’Connor was told of the deteriorating situation for Afghan detainees and that the prisons were not up to international standards. The report from an advisor to the Afghanistan Task Force stated that the Tory government spin on the issue was “out of sync with reporting from the field.”

The question becomes: if Cabinet minsters were being informed of the harsh conditions of detention, why did they do nothing about it?

Indeed, there are many central questions that still remain. Who in the Canadian Government knew of these concerns? Why did it take years for even this scant documentation to be released? How many officials in the field knew about the issues?

The torture of Afghan detainees has been revealed by dozens of human rights monitoring groups that have found pervasive use of torture. Malalai Joya, former Afghan Member of Parliament said it is an open secret that torture is occurring. How can cabinet members who should, theoretically, be authorities on all details of the war, not be aware of this?

This issue will not go away. There are calls for a much more rigorous process of review which should be undertaken immediately. If torture is allowed to go unheeded and excused then what is to prevent further abuses of prisoners/detainees in any other conflict or even at home.

The Canadian Peace Alliance is calling on all political parties to demand that a full judicial inquiry be held and that all relevant documents be released. If the officers and the politicians in Ottawa knew that they were giving illegal orders, they need to resign and be held to account for their actions. Further we are calling for all Canadian forces, trainers or combat troops to be brought home. Any support for the torturers of the Afghan government is a crime which must end.

← Freedom Flotilla to sail soon
Why CETA is Bad for Canada →