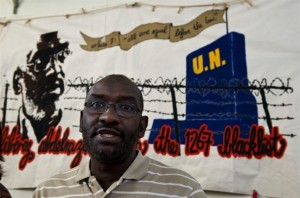 On June 16th, 2011, a seven-person delegation, acting in solidarity with Abousfian Abdelrazik, met with a representative of the German Mission to the United Nations (Germany currently chairs the 1267-Committee) and representatives of the 1267 Monitoring Team. The delegation travelled to New York to support Abdelrazik’s five-year struggle to have his name removed from the Security Council’s “1267” blacklist.

During the almost two-hour meeting, the delegates, most of whom knew Abdelrazik personally, stressed the urgency of removing him from the list and pointed out the obvious inconsistencies of the blacklisting regime with the founding principles of the United Nations as articulated by the Universal Declaration of Human Rights; including the right to freedom and to a fair trial, the prohibition on torture (false information obtained under torture seems to have been used against Abdelrazik) as well as rights to security of the person, to earn a living, and to free association.

The delegates argued that the blacklist should be abolished, not simply reformed. They were able to convey the fact that people are increasingly aware of the issue and that mounting numbers of organizations and individuals are calling for the regime to be scrapped.

The diplomatic reserve of the UN officials was briefly punctured when they were suddenly brought face-to-face with Abdelrazik via a personal video message, in which he invited those present, “and the rest of the committee to walk in my shoes. I invite you to come to live with me for one day … I am sure this is going to touch you, because you are human beings. Please, I have suffered enough. I want to end this suffering.” As the spokesperson for the 1267-Committee remarked, it was good to be reminded that there are real human beings involved.

Full message from Abdelrazik to the 1267-Committee

Untitled from Neal Rockwell on Vimeo.

Asked for a response that delegates could bring back to Abdelrazik, the 1267-Committee spokesperson asked Abdelrazik to trust in the delisting process. As Karl Flecker, National Director of the Anti-Racism and Human Rights Department of the Canadian Labour Congress and one of the delegates, explained to media after the meeting, “What that means for Abousfian is that he has to, once again, trust the people who have had control over his life for the last five years. And to wait longer for justice. We cannot acquiesce to the hope for modest reforms to something that has fundamental injustice.”

Video of Karl Flecker and Sameer Zuberi, Canadian Muslim Forum, speaking at press briefing outside UN after the meeting

After the press briefing, the delegates were joined outside the gates of the UN by supporters from New York and a fabulous marching band, the Rude Mechanical Orchestra:

Audio of RMO (yes! they are singing, “hey hey, ho ho! 1267 has got to go!”)
www.mediacoop.ca/audio/rude-mechanical-orchestra-playing-abdelrazik-nyc/7516

It was clear from the meeting that the 1267-Committee is feeling international pressure and hoped to relieve some of that pressure by introducing a few modest reforms. Indeed, the meeting with the Project Fly Home delegation took place on the eve of a Security Council meeting where reforms to the blacklisting regime, as well as the political imperative of removing the Taliban from the list (in order to advance a negotiated deal in Afghanistan), were due to be discussed. However, in the end, the reforms adopted on June 17th by the Security Council to the delisting process, in resolution 1989, failed to make any significant progress towards justice. In essence, instead of 15 states having an unconditional veto over a delisting request, now only five do (the five permanent members of the security council).

Press release from FIDH on the reforms
www.peoplescommission.org/files/abousfianMedia/fidh_june_2011.pdf

The delegates delivered a letter to the 1267-Committee, calling for Abdelrazik to be delisted and for an end to the 1267-Regime, co-signed by almost 100 organizations across Canada, collectively involving millions of people: student groups, human rights organizations, faith-based organizations, labour unions, community groups, NGOs and more. These organizations were joined by American allies, including the AFL-CIO – the main American labour umbrella, with 12.2 million members – and the Council of American-Islamic Relations (CAIR), in calling for Abdelrazik to be delisted and the 1267-List to be scrapped.

Read letter to Chair of 1267-Committee and see list of endorsers
www.peoplescommission.org/files/abousfianMedia/letter_to_1267_en.pdf

The blacklist spokesperson also received a stack of letters from individuals across Canada, most of whom had donated to Abdelrazik in open defiance of the sanctions imposed on him. The letters offer a snapshot of the diversity and strength of support for justice for Abdelrazik across the country.

Read quotes from some of the letters (well worth a read!)
www.peoplescommission.org/files/abousfianMedia/wittig_excerpts.pdf

The delegation was preceded by events in Vancouver, Calgary, Regina, Ottawa, Kitchener and Halifax, including two sanctions-busting events, as well as a press conference in Montreal and a caravan to the border to see the delegation off. The initiative was covered by the media quite sympathetically in Canada and internationally and two editorials called for Abdelrazik to be delisted.

Please stay in touch with Project Fly Home as we continue to work in solidarity with Abdelrazik and to oppose this international blacklist. In the meantime, there are a range of ways in which you can support Abdelrazik’s campaign to get off the international blacklist and register your opposition to political repression: www.peoplescommission.org/en/abdelrazik/action.php

Project Fly Home is a working group of QPIRG McGill.