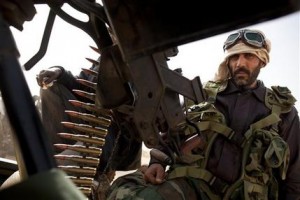 The words they find it very difficult to say — “civil war”.

Libya is engaged in a civil war. The United States and the European Union and NATO — The Holy Triumvirate — are intervening, bloodily, in a civil war. To overthrow Moammar Gaddafi. First The Holy Triumvirate spoke only of imposing a no-fly zone. After getting support from international bodies on that understanding they immediately began to wage war against Libyan military forces, and whoever was nearby, on a daily basis. In the world of commerce this is called “bait and switch”.

Gaddafi’s crime? He was never respectful enough of The Holy Triumvirate, which recognizes no higher power, and maneuvers the United Nations for its own purposes, depending on China and Russia to be as spineless and hypocritical as Barack Obama. The man the Triumvirate allows to replace Gaddafi will be more respectful.

So who are the good guys? The Libyan rebels, we’re told. The ones who go around murdering and raping African blacks on the supposition that they’re all mercenaries for Gaddafi. One or more of the victims may indeed have been members of a Libyan government military battalion; or may not have been. During the 1990s, in the name of pan-African unity, Gaddafi opened the borders to tens of thousands of sub-Saharan Africans to live and work in Libya. That, along with his earlier pan-Arab vision, did not win him points with The Holy Triumvirate. Corporate bosses have the same problem about their employees forming unions. Oh, and did I mention that Gaddafi is strongly anti-Zionist?

Does anyone know what kind of government the rebels would create? The Triumvirate has no idea. To what extent will the new government embody an Islamic influence as opposed to the present secular government? What jihadi forces might they unleash? (And these forces do indeed exist in eastern Libya, where the rebels are concentrated.) Will they do away with much of the welfare state that Gaddafi used his oil money to create? Will the state-dominated economy be privatized? Who will wind up owning Libya’s oil? Will the new regime continue to invest Libyan oil revenues in sub-Saharan African development projects? Will they allow a US military base and NATO exercises? Will we find out before long that the “rebels” were instigated and armed by Holy Triumvirate intelligence services?

In the 1990s, Slobodan Milosevic of Yugoslavia was guilty of “crimes” similar to Gaddafi’s. His country was commonly referred to as “the last communists of Europe”. The Holy Triumvirate bombed him, arrested him, and let him die in prison. The Libyan government, it should be noted, refers to itself as the Great Socialist People’s Libyan Arab Jamahiriya. American foreign policy is never far removed from the Cold War.

We must look closely at the no-fly zone set up for Iraq by the US and the UK (falsely claimed by them as being authorized by the United Nations) beginning in the early 1990s and lasting more than a decade. It was in actuality a license for very frequent bombing and killing of Iraqi citizens; softening up the country for the coming invasion. The no-fly zone-cum invasion force in Libya is killing people every day with no end in sight, softening up the country for regime change. Who in the universe can stand up to The Holy Triumvirate? Has the entire history of the world ever seen such power and such arrogance?

And by the way, for the 10th time, Gaddafi did not carry out the bombing of PanAm Flight 103 in 1988. Please enlighten your favorite progressive writers on this.

William Blum is the author of:

Portions of the books can be read, and signed copies purchased, at www.killinghope.org