Harper’s decision to continue Canada’s participation in the occupation of Afghanistan beyond 2011 is no surprise to anyone who has been paying attention. Ignatieff’s acquiescence is similarly unsurprising. Still, in light of previous statements, their hypocrisy is impressive. For example:

“We’re bound by the parliamentary resolution. I’ve said clearly that our party’s position currently is that the military phase of the mission ends in 2011.”
–Michael Ignatieff quoted by Canadian Press, February 2009

“Mr. Speaker, as members of the House know, we made a pledge during the last election campaign to put international treaties and military engagements to a vote in this chamber.”
–Stephen Harper in the House of Commons, May 17, 2006

Tory-Liberal strategists and their apologists in the mainstream media are framing the issue in terms of training versus combat. By misrepresenting the character of the military mission they hope to defuse outrage over the promise not to commit Canada to “military engagements” without a Parliamentary vote.

Their refusal to debate the issue in the House of Commons deprives the NDP and BQ of an opportunity to challenge the government’s plans. It may also divert them from what should be the real issue, namely: “Should Canada have any involvement in Afghanistan?” 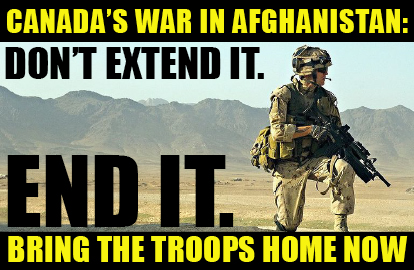 Most Canadians oppose continued military involvement in Afghanistan. A CBC-EKOS poll in April 2010 indicated that 60 per cent of Canadians opposed an extension of the military mission beyond 2011. A September 2010 Global News poll confirmed this view, with 61 per cent opining that “all Canadian troops need to come home.”

One has to ask what kind of democracy we have if the governing party and the principle opposition party can collude to flout the will of the majority of Canadians on issues as important as war and peace. Harper’s decision is one more indication of his lack of fitness to govern our country; Ignatieff’s complicity confirms his unsuitability to succeed Mr. Harper in the next election.

Where does this leave the NDP? A recent NDP statement is problematic:

“Harper waited until MPs left Ottawa and then engaged in a backroom deal with the Ignatieff Liberals to extend the military mission in Afghanistan. This is wrong,” said New Democrat Leader Jack Layton. “A majority of Canadians say they are against extending the military mission – Conservatives and Liberals must start listening to Canadians, not just to each other.”

“What New Democrats are saying is we need an increased focus on diplomacy, development and governance in Afghanistan, in order to build a lasting peace to this region,” said Layton. “Canada’s military has served with honour and done its fair share, now it’s time for Canada’s contribution to be through aid and diplomacy.”

Layton expresses his opposition to continued military action and his support for the peaceful aspirations of Canadians. This is positive.

However, his opportunistic genuflection to “Canada’s military” which “has served with honour and done its fair share” misleads Canadians about the shameful character of Canada’s involvement in America’s imperial war. The fact is, before the UN gave the occupation a fig-leaf of legality, the American-led invasion was a naked act of aggression, a crime against humanity, a war of aggression that had been on the drawing board well before Sept. 11, 2001. By supporting this war, Canada’s political leaders (Liberal and Conservative) are the moral equivalent of the Nazis we hanged at Nuremberg; our troops are their hired guns.

Layton’s commitment to ongoing aid for the the corrupt gang of drug lords and crooks that allegedly governs Afghanistan (aka, the Karzai government) reveals either a complete misreading of the war in Afghanistan (which is as much as anything else a civil war between ethnically defined contenders) or a preference for the kinder, gentler forms of imperialism that have characterized Canadian foreign policy in the past (also known as “peace keeping”).

The fact is, any Canadian involvement in Afghanistan that lends support to the Karzai government puts us on the side of America’s imperial project. Layton should know better.

Where does this leave the peace movement? I suppose we should be grateful for any kind of Parliamentary allies, however imperfect. That said, it seems unlikely that Parliament will extract us from this war or keep us out of future American imperial adventures.

“The holding of mass demonstrations and antiwar protests is not enough. What is required is the development of a broad and well organized grassroots antiwar network which challenges the structures of power and authority.

“What is required is a mass movement of people which forcefully challenges the legitimacy of war, a global people’s movement which criminalizes war.

“Antiwar protest does not question the legitimacy of those to whom the protest is addressed.

“Protest is accepted under Western style “democracy”, precisely because it accepts the established political order, while exerting pressure on political leaders to shift their policy stance.

“Protest serves the interests of the war criminals in high office, to whom the demands are directed.

“Ultimately what is at stake is the legitimacy of the political and military actors and the economic power structures, which control the formulation and direction of US foreign policy.”

While much of his article appears to be more directed at the American peace movement, these concerns need to be addressed by Canadian activists if we are to move beyond the limitations of Layton’s lame response.

This article was originally published at Paul S. Graham.