Another False Ending: Contracting Out the Occupation 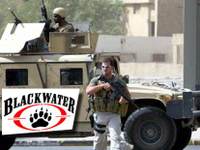 Another false ending to the Iraq war is being declared. Nearly seven years after George Bush’s infamous “Mission Accomplished” speech on the USS Abraham Lincoln, President Obama has just given a major address to mark the withdrawal of all but 50,000 combat troops from Iraq. But, while thousands of US troops are marching out, thousands of additional private military contractors (PMCs) are marching in. The number of armed security contractors in Iraq will more than double in the coming months.

While the mainstream media is debating whether Iraq can be declared a victory or not there is virtually no discussion regarding this surge in contractors. Meanwhile, serious questions about the accountability of private military contractors remain.

In the past decade the United States has dramatically shifted the way in which it wages war – fewer soldiers and more contractors.

← Behind America’s war on terror
Psywar: The real battlefield is the mind →