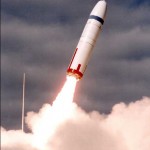 A war can be won without being waged. Victory can be attained when an adversary knows it is vulnerable to an instantaneous and undetectable, overwhelming and devastating attack without the ability to defend itself or retaliate.

What applies to an individual country does also to all potential adversaries and indeed to every other nation in the world.

There is only one country that has the military and scientific capacity and has openly proclaimed its intention to achieve that ability. That nation is what its current head of state defined last December as the world’s sole military superpower. [1] One which aspires to remain the only state in history to wield full spectrum military dominance on land, in the air, on the seas and in space.

To maintain and extend military bases and troops, aircraft carrier battle groups and strategic bombers on and to most every latitude and longitude. To do so with a post-World War II record war budget of $708 billion for next year.

Having gained that status in large part through being the first country to develop and use nuclear weapons, it is now in a position to strengthen its global supremacy by superseding the nuclear option.

The U.S. led three major wars in less than four years against Yugoslavia, Afghanistan and Iraq from 1999-2003 and in all three cases deployed from tens to hundreds of thousands of “boots on the ground” after air strikes and missile attacks. The Pentagon established military bases in all three war zones and, although depleted uranium contamination and cluster bombs are still spread across all three lands, American troops have not had to contend with an irradiated landscape. Launching a nuclear attack when a conventional one serves the same purpose would be superfluous and too costly in a variety of ways.