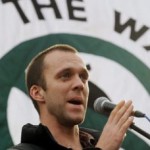 On the same day that British Prime Minister Gordon Brown — whose war polices have killed thousands — insisted that the illegal Iraq war was the “right” thing to do, Lance Corporal Joe Glenton was sentenced to nine months imprisonment for refusing to return to Afghanistan to fight a war he believed to be unjustified and a sensless loss of life for Afghans and Iraqis alike.

Stop the War Coalition (UK), which has been active in his defence, has not given up the campaign for his freedom.