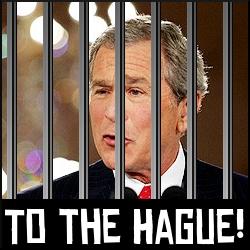 An international campaign is underway to bring to trial former U.S. president George W. Bush and some of his senior officials.

On January 19, 2010, Professor Francis A. Boyle of the University of Illinois College of Law in Champaign, U.S.A. filed a complaint with the Prosecutor for the International Criminal Court (ICC) in The Hague against George W. Bush, Richard Cheney, Donald Rumsfeld, George Tenet, Condoleezza Rice, and Alberto Gonzales for crimes against humanity – the criminal policy and practice of “extraordinary rendition” perpetrated upon about 100 people.

Extraordinary rendition is the CIA program of kidnapping, interrogation and torture of alleged terrorists in secret prisons. Compared to the wars in Iraq and Afghanistan that resulted in slaughter on a massive scale, these offences might seem mild in comparison. However, because these crimes were carried out in several countries that were signatories to the Rome Statute that established the ICC, there are strong legal grounds for the ICC to prosecute Bush and his cronies.

Professor Boyle’s complaint has given rise to a campaign called “Bush to the Hague,” the objective of which is to mobilize international support for bringing Bush and his cronies to justice.

Peace Alliance Winnipeg endorses this campaign and urges its members and friends to lend their support.

What can you do to help?