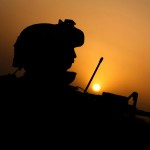 While our Prime Minister talks about the the “Olympic Truce”, a symbolic suspension of war during the winter games, the people of Afghanistan are facing a new wave of violence.

The official website for the 2010 Winter Olympics claims that “Vancouver 2010 aims to pursue the Olympic Truce goals of protecting the interests of athletes and contributing to peaceful and diplomatic solutions to conflict around the world.” However, on Friday, February 12, NATO forces launched the largest assault to date in the nine year war.

The assault on Marjah (in Helmand province) has already been bloody for Afghans trapped in the fighting. Statistics vary, depending on who compiles them, but at least 20 civilians have already been killed and the fight is getting more intense. NATO officials now admit that the attack could go on for another 25-30 days.

NATO officials took great pains to convince us that they did everything to try and stop civilian casualties. They took the unusual step of announcing the assault a week before it started and dropped thousands of leaflets on the town warning residents to flee. However, when the assault began, only 2,700 of the 125,000 people who live in the region had left. Those who stayed behind are now caught in the crossfire.

The number of people displaced by the attack is growing daily. Amnesty International is calling for immediate humanitarian assistance to the more than 6000 people who have now been forced to flee the fighting over the past few days.

The original plan for the attack was to begin a reconstruction effort immediately following the destruction; in the hope of winning the hearts and minds of those who survive. This plan has drawn sharp criticism from the UN and other aid agencies who are deeply concerned about the militarization of aid. The UN said that it would not take part in any reconstruction efforts if they are led by the military. “We are not part of that process, we do not want to be part of it,” said Robert Watkins, the Deputy Special Representative of the Secretary General.

Oxfam International was blunt about the problems of military aid: “Military-led humanitarian and development activities are driven by donors’ political interests and short-term security objectives and are often ineffective, wasteful and potentially harmful to Afghans,” a statement from the organization said.

Canadian helicopters and soldiers have participated in the fighting, playing a relatively minor role, but that will change in the late spring or early summer when Canada is expected to be the “tip of the spear” in a major assault in Kandahar according to Canadian Brigadier-General, Craig King.

The Canadian Peace Alliance calls on the Canadian government to observe the Olympic truce, and to use the truce to begin a full and complete withdrawal of Canadian forces from Afghanistan.

← Justice for Abousfian Abdelrazik
Chossudovsky: US will start WW3 by attacking Iran →