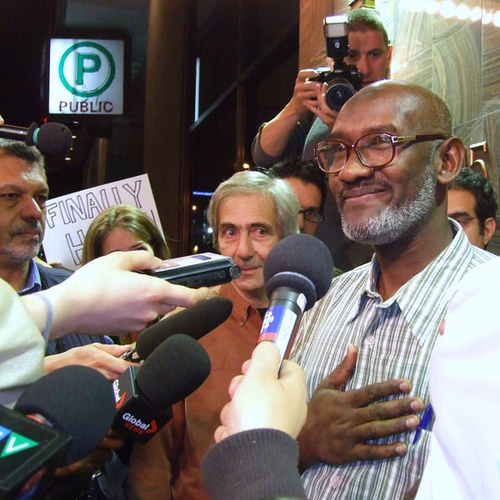 Abousfian Abdelrazik meets the press in Montreal on his return to Canada on Saturday, June 27, 2009. Photo: Tatiana Gomez

Delist Now!: Six-Month Campaign to Free Abousfian Abdelrazik from the Prison Without Walls

The UN 1267 List, which has included Mr. Abdelrazik’s name since 2006, subjects individuals to a flight ban, an arms embargo and a complete asset freeze. These restrictions are severe and indefinite. Listed individuals face vague allegations, have no right to a hearing before they are placed on the list, and are provided with no evidence to support the claims against them. The Federal Court wrote in its June 2009 decision on Mr. Abdelrazik’s case, “There is nothing in the listing or de-listing procedure that recognizes the principles of natural justice or that provides for basic procedural fairness.” (For more information, please read our backgrounder on the 1267 List.)

Project Fly Home invites you to join us over the next six months as we wage an intense campaign focused on two specific demands, which we hope will help move us towards the abolition of the 1267 List and challenge the racist national security agenda as a whole. If this campaign is successful, Mr. Abdelrazik will be able to mark this upcoming one-year of his return with his fundamental rights and freedoms restored, and will be able to move on and live his life in dignity.

The two demands this six-month campaign will make of the government are:

In 2002, Canada changed the Al Qaida and Taliban Regulations (the domestic legislation implementing the 1267 regime) to exempt Mr. Liban Hussein, the only Canadian then on the 1267 list (for more information on Mr. Liban Hussein, see the paragraphs in this article. We demand that the government do the same for Mr. Abdelrazik, or otherwise take action to immediately free him from the sanctions in Canada, ideally repealing the regulations entirely, to be consistent with basic principles of justice and Canadian and international human rights law.

[2] Actively advocate to delist Mr. Abdelrazik from the UN 1267 List.

Though the Canadian government asked the UN 1267 Committee to remove Mr. Abdelrazik’s name from the 1267 List in 2007, it is very difficult to get off the 1267 List once you are on it. There are, in fact, dozens of dead people on the list. Delisting requires the consensus of all members of the committee. Thus, each member of the committee can block a delisting request, and is not required to provide any reason for doing so. This leads to decisions that seem to have much less to do with the individuals in question than external political objectives. The Canadian government must champion Mr. Abdelrazik’s case to the Committee, by clearly making it a diplomatic priority in their relations with the members of the committee, in order for him to be delisted.

In the next six months, Project Fly Home Montreal will be organizing a number of actions and events in the context of this campaign. Please stay posted for more details! Please plan your own actions to support this campaign in the lead-up to the first anniversary of Mr. Abdelrazik’s return to Canada.

To get involved, for more information, or to inform us of your plans to support this six-month focused campaign, please contact us at projectflyhome@gmail.com.