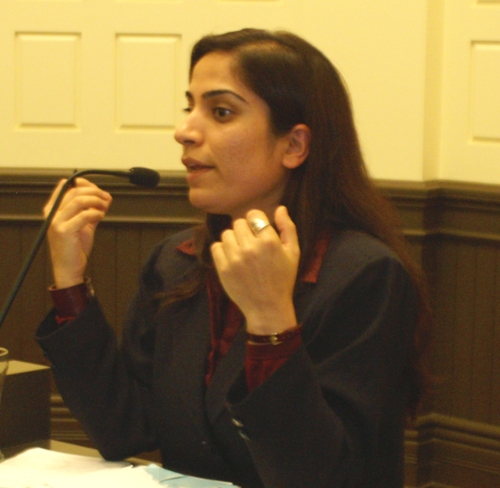 Malalai Joya, addressing an audience of 300 in Winnipeg, Nov. 16, 2009. You can watch video of her Winnipeg speech here. Photo: Glenn Michalchuk

I have just completed a two-week speaking tour across Canada, bringing a message to the great people of this country: The people of Afghanistan are fed up with the occupation of their country and with the corrupt, Mafia-state of Hamid Karzai and the warlords and drug lords backed by NATO.

On behalf of the suffering people of Afghanistan, I offer my condolences to the families here who have lost their loved ones. I believe these fallen soldiers, themselves, are the victims of the wrong policy of your government. The families of Afghan civilians killed in this war share your feelings of loss. If we turn these sorrows into strength, we can end this war. Bringing the troops home at the end of 2011 is too late; the troops should be withdrawn as soon as possible, before more Afghan and Canadian lives are needlessly lost.

Today, it has become an open secret that the Canadian government of Stephen Harper has been complicit in the torture of countless innocent Afghans. This is just one reason people in Kandahar and across my country are tired of this war.

It is clear now that the real motive of the U.S. and its allies, hidden behind the so-called “war on terror,” was to convert Afghanistan into a military base in Central Asia and the capital of the world’s opium drug trade. Ordinary Afghan people are being used in this chess game, and western taxpayers’ money and the blood of soldiers is being wasted on this agenda that will only further destabilize the region.

The recent so-called election in Afghanistan tells you all you need to know about what kind of “democracy” has been imposed by the occupation. It is ridiculous to Afghans that the Harper government and Defence Minister Peter MacKay have called this process a “successful election.”

Even the cats of Afghanistan laugh at this kind of statement, because everyone knows that this was the most fraudulent election possible. Before the vote, people on the streets predicted the outcome with a proverb, “It will be the same donkey with a new saddle.” In the end, in fact, we have seen that even the saddle – Karzai – is not new.

Now that Hamid Karzai has been inaugurated again, the nature of his government is more obvious than ever. Both of his new vice-president, Fahim and Khalili, are warlords with the blood of innocents on their hands. In Kandahar, where Canadian troops have been stationed for years, Karzai’s brother is reported to be involved in drug trafficking, and the New York Times recently reported that he’s been receiving regular payments from the U.S. CIA.

So do not be deceived by talk of Karzai cleaning up corruption. His appointment of a new anticorruption team is a case of the rabbit being put in charge of the carrots.

Torture, drug trafficking, the continued rule of warlords and fundamentalists – these are the only things that this war has brought Afghans. Today, our people are being vicitimized by two enemies: the occupation forces bombing us from the sky, and the warlords and their Taliban brothers-in-creed.

If the troops withdraw, it will be easier for Afghans to fight one enemy and to determine our own future. It is the duty of the Afghan people to work for freedom and democracy; these values can never be donated to us by the very foreign powers who – after nearly three decades of funding various fundamentalists are arming warlords and other criminals – are responsible for many of the problems Afghanistan faces today.

While I am opposed to the policy of the Canadian government in Afghanistan, I have been very moved by the support of ordinary people across this country, from Victoria to Halifax. Having spoken to big public meetings in cities right across this country, it is clear that the Canadian people are fed up with their government’s policy in Afghanistan. Let’s raise our voices together to end this unjust and devastating war.

Malalai Joya was the youngest woman elected to the Afghan Parliament in 2005. She has recently completed a cross-Canada book tour in support of her new political memoir, written with Vancouver writer and activist Derrick O’Keefe, A Woman Among Warlords: The Extraordinary Story of an Afghan Who Dared to Raise Her Voice.

← Muddying the waters over torture
Monty Python in Afghanistan →