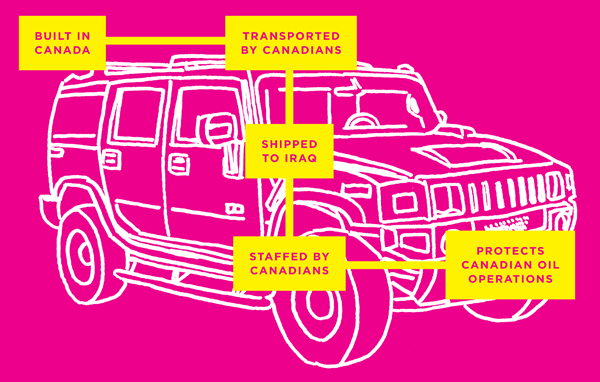 In March 2008, when the invasion of Iraq by George W. Bush’s “coalition of the willing” marked its fifth anniversary, Canadian media outlets were in a self-congratulatory mood: “Canada isn’t involved” there, one reporter wrote. “The further we get away from the actual date, the better Canada’s decision to not get involved with the U.S. invasion of Iraq looks,” wrote another. Another referenced the anti-war demonstrations that “stopped the Canadian government’s support for the invasion of Iraq.” It was a fact to be proud of: “We didn’t go to Iraq.”

Didn’t we? In fact, Canada has been involved with the Iraq conflict in many ways—political, economic, military—some subtle, some overt. But the notion that Canada “didn’t go to Iraq” is, at best, wishful thinking. And though the war has slipped off the front page of the newspaper, Canada’s involvement in Iraq hasn’t decreased—in fact, today we’re in it deeper than ever.