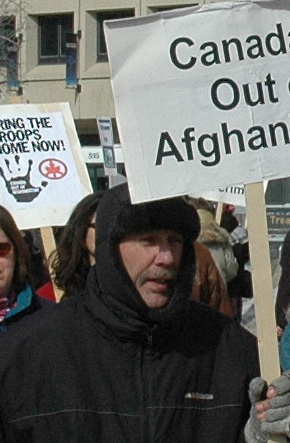 Veteran peace and social justice activist Nick Ternette is in hospital in Winnipeg.

As his wife, Emily, explained in a recent email: “Nick recently developed pain in his right thigh, and on Friday night the pain became unbearable for him. After going to Urgent Care and then on to the Grace Hospital, followed by numerous tests and an emergency ambulance ride to the Health Sciences Centre, it was determined that he had a virulent infection in the muscles of his right thigh which was spreading fast. Because his immune system was so low due to his ongoing “maintenance” cancer treatments, doctors were unable to treat him with antibiotics, so their only choice was to amputate. Early Saturday morning he came through emergency surgery where they amputated his entire right leg, and the left leg from above the knee down.”

Nick has devoted his entire life to political action. While this has earned him the respect of political friends and foes alike, it hasn’t been good for his pocketbook. Friends have banded together to help out financially and otherwise. They’ve set up an account at the Royal Bank (Arlington Street and Portage Avenue branch) in Winnipeg. You can make a donation at any Royal Bank branch.

Crusader for justice sadly shows life can be unjust

With a guy whose life has been devoted to fairness and social justice for others, you’d think karma might have at least paid Nick Ternette a visit by now.

But that’s not the way life has been for Winnipeg’s best-known political activist, a guy who’s scratched out a living happily delivering newspapers for the past 20 years, and writing freelance columns for a weekly audience.

So far as I know Nick has never complained about the meagre financial rewards for doing work he enjoyed.

But at age 64 — just five months away from officially being a pensioner — Nick Ternette has never been rewarded the way he should have been for being the city’s social conscience. Certainly not when he’s been thrice nominated for the Order of Manitoba, and thrice diced. Which is why what’s been happening of late, as shocking as it first was, seems less surprising on reflection.

The man who ran for mayor the way Don Quixote tilted at windmills — five times without hope, money or much respect — won’t be running anywhere anymore. He won’t be walking, either.

Nick’s legs were amputated a week ago last Saturday in an emergency surgery. His right leg at the hip, his left above the knee.

← Inside the Military-Entertainment Complex
Ending Nuclear Terrorism: By America and Others →