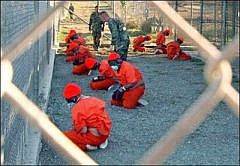 The mesh-wire cages, suitable only for animals, are empty now and overgrown, but they will stand forever as a symbol of the Bush administration’s inept, brutal and destructive “War on Terror” policies, implemented in the wake of the terrorist attacks on the US mainland on September 11, 2001.

This is Camp X-Ray, the first of the prison camps at the US naval base in Guantánamo Bay, Cuba, and it was here that the grimly iconic photos were taken, on January 11, 2002, showing the first prisoners arriving at the prison from Afghanistan. The images of these shackled and dehumanized figures, clad in orange, kneeling on gravel in painful stress positions, and with their eyes and ears blocked, have come to define the “War on Terror” as much as the notorious photos of abuse in Abu Ghraib prison in Iraq.

← Who will be the last to die for this mistake?
Why Afghans Have No Hope in This Week’s Vote →