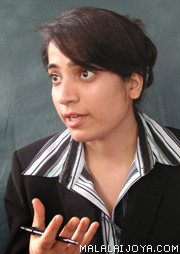 As an elected representative for Farah, Afghanistan, I add my voice to those condemning the NATO bombing that claimed over 150 civilian lives in my province earlier this month. This latest massacre offers the world a glimpse of the horrors faced by our people.

However, as I explained at a May 11 press conference in Kabul, the U.S. military authorities do not want you to see this reality. As usual, they have tried to downplay the number of civilian casualties, but I have information that as many as 164 civilians were killed in the bombings. One grief stricken man from the village of Geranai explained at the press conference that he had lost 20 members of his family in the massacre.

The Afghan government commission, furthermore, appears to have failed to list infants under the age of three who were killed. The government commission that went to the village after three days — when all the victims had been buried in mass graves by the villagers — is not willing to make their list public. How can the precious lives of Afghans be treated with such disrespect?

The news last week is that the U.S. has replaced their top military commander in Afghanistan, but I think this is just a trick to deceive our people and put off responsibility for their disastrous overall strategy in Afghanistan on the shoulders of one person.

The Afghan ambassador in the U.S. said in an interview with Al Jazeera that if a ‘proper apology’ is made, then ‘people will understand’ the civilian deaths. But the Afghan people do not just want to hear ‘sorry.’ We ask for an end to the occupation of Afghanistan and a stop to such tragic war crimes.

The demonstrations by students and others against these latest air strikes, like last month’s protest by hundreds of Afghan women in Kabul, show the world the way forward for real democracy in Afghanistan. In the face of harassment and threats, women took to the streets to demand the scrapping of the law that would legalize rape within marriage and codify the oppression of our country’s Shia women. Just as the U.S. air strikes have not brought security to Afghans, nor has the occupation brought security to Afghan women. The reality is quite the opposite.

This now infamous law is but the tip of the iceberg of the women’s rights catastrophe in our occupied country. The whole system, and especially the judiciary, is infected with the virus of fundamentalism and so, in Afghanistan, men who commit crimes against women do so with impunity. Rates of abduction, gang rape, and domestic violence are as high as ever, and so is the number of women’s self-immolations and other forms of suicide. Tragically, women would rather set themselves on fire than endure the hell of life in our ‘liberated’ country.

The Afghan Constitution does include provisions for women’s rights – I was one of many female delegates to the 2003 Loya Jirga who pushed hard to include them. But this founding document of the ‘new Afghanistan’ was also scarred by the heavy influence of fundamentalists and warlords, with whom Karzai and the West have been compromising from the beginning.

In fact, I was not really surprised by this latest law against women. When the U.S. and its allies replaced the Taliban with the old notorious warlords and fundamentalists of the Northern Alliance, I could see that the only change we would see was from the frying pan to the fire.

There have been a whole series of outrageous laws and court decisions in recent years. For instance, there was the disgusting law passed on the pretext of ‘national reconciliation’ that provided immunity from prosecution to warlords and notorious war criminals, many of whom sit in the Afghan Parliament. At that time, the world media and governments turned a blind eye to it.

My opposition to this law was one of the reasons that I, as an elected MP from Farah Province, was expelled from Parliament in May 2007. More recently, there was the outrageous 20-year sentence handed down against Parvez Kambakhsh, a young man whose only crime was to allegedly distribute a dissenting article at his university.

We are told that additional U.S. and NATO troops are coming to Afghanistan to help secure the upcoming presidential election. But frankly the Afghan people have no hope in this election – we know that there can be no true democracy under the guns of warlords, the drug trafficking mafia and occupation.

With the exception of Ramazan Bashardost, most of the other candidates are the known, discredited faces that have been part and parcel of the mafia-like, failed government of Hamid Karzai. We know that one puppet can be replaced by another puppet, and that the winner of this election will most certainly be selected behind closed doors in the White House and the Pentagon. I must conclude that this presidential election is merely a drama to legitimize the future U.S. puppet.

Just like in Iraq, war has not brought liberation to Afghanistan. Neither war was really about democracy or justice or uprooting terrorist groups; rather they were and are about U.S. strategic interests in the region. We Afghans have never liked being pawns in the ‘Great Game’ of empire, as the British and the Soviets learned in the past century.

It is a shame that so much of Afghanistan’s reality has been kept veiled by a western media consensus in support of the ‘good war.’ Perhaps if the citizens of North America had been better informed about my country, President Obama would not have dared to send more troops and spend taxpayers’ money on a war that is only adding to the suffering of our people and pushing the region into deeper conflicts.

A troop ‘surge’ in Afghanistan, and continued air strikes, will do nothing to help the liberation of Afghan women. The only thing it will do is increase the number of civilian casualties and increase the resistance to occupation.

To really help Afghan women, citizens in the U.S. and elsewhere must tell their government to stop propping up and covering for a regime of warlords and extremists. If these thugs were finally brought to justice, Afghan women and men would prove quite capable of helping ourselves.

Malalai Joya was the youngest member of the Afghan Parliament, elected in 2005 to represent Farah Province. In May 2007 she was unjustly suspended from Parliament. Her memoir, A Woman Among Warlords: The Extraordinary Story of an Afghan Who Dared to Raise Her Voice, is forthcoming later this year from Scribner.

← Rally against the Harper government
Dark Days — The Reading →