The Interview The Government Doesn’t Want You to See: George Galloway on The Hour, Monday March 30th 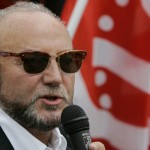 **FRIDAY UPDATE:** George Galloway is challenging the decision not to let him into in Canada. Galloway’s lawyers will go before a Federal Court on Sunday to reverse the decision barring him from entering.

Galloway’s lawyers filed papers yesterday saying the decision to keep him out was a “politically motivated” attack on freedom of expression.

Galloway has indicated that if the decision is overturned he will come to the set of The Hour on Monday for his interview, if the legal attempts fail we are working to arrange a satellite interview. Expect a few questions regarding the government’s decision, his view on Afghanistan/the Taliban, and his relationship with Hamas. He will be on the show, Monday March 30th, 11 p.m., on CBC. We will also update this blog and Twitter as the interview is recorded. Should be quite the interesting interview.

The Canadian government refused entry to Galloway, citing him as a national security threat. According to CBC.ca, Galloway called the decision “irrational, inexplicable and an affront to Canada’s good name,” and said he would fight the ruling with “all means at my disposal.”

Some of you may recall we had George Galloway on the show two seasons ago.

For those of you that aren’t familiar with him, I highly recommend watching his previous appearance on The Hour here. What are your thoughts? Is this truly a security concern or is this censorship?